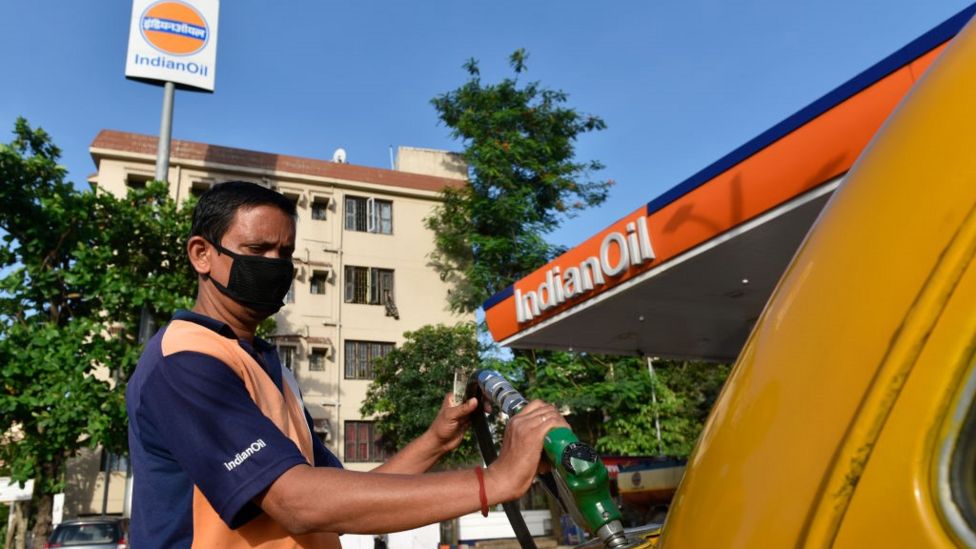 Rising global oil prices are a concern for India's policymakers
Russia is seeking new markets for its oil exports as Western sanctions tighten - and India has been taking advantage of discounted prices to ramp up imports from the country.

The US has said that although these oil imports do not violate sanctions, "support for Russia...is support for an invasion that obviously is having a devastating impact".

Where does India get its oil?

After the US and China, India is the world's third-largest consumer of oil, over 80% of which is imported.

In 2021, India bought about 12 million barrels of oil from Russia, only 2% of its total imports.

By far the largest supplies last year came from the Middle East, with significant quantities also from the US and Nigeria. 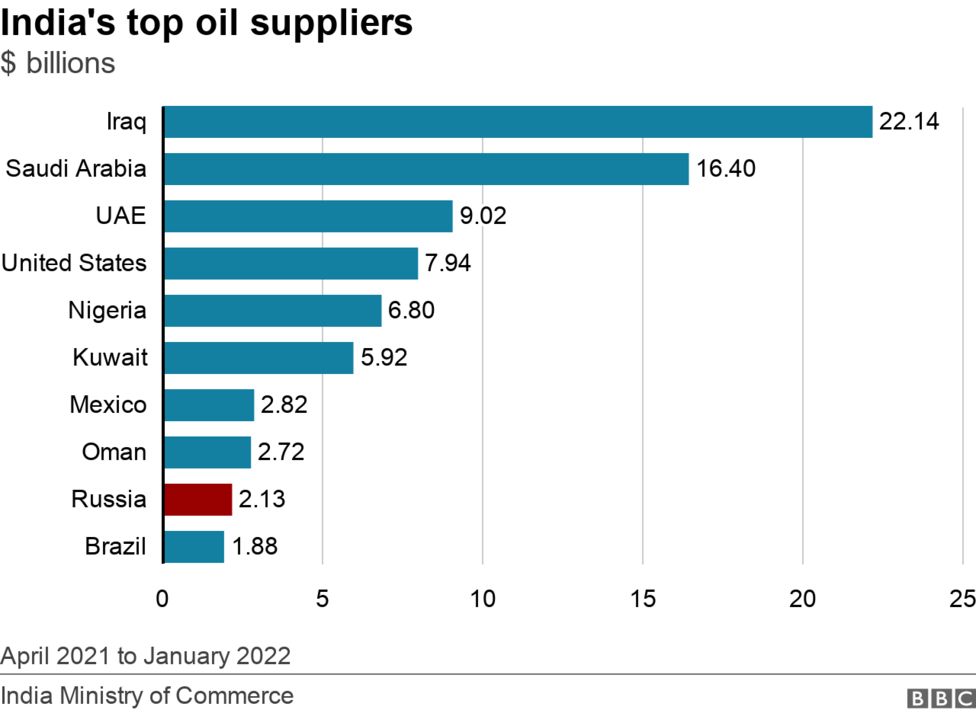 In January and February, India didn't import any oil from Russia.

But contracts for March and April have already reached six million barrels, according to data compiled by Kpler, a commodities research group.

The Indian government says even if it buys more oil from Russia, it would "still be a drop, literally a drop, in a larger bucket" of its oil imports globally. 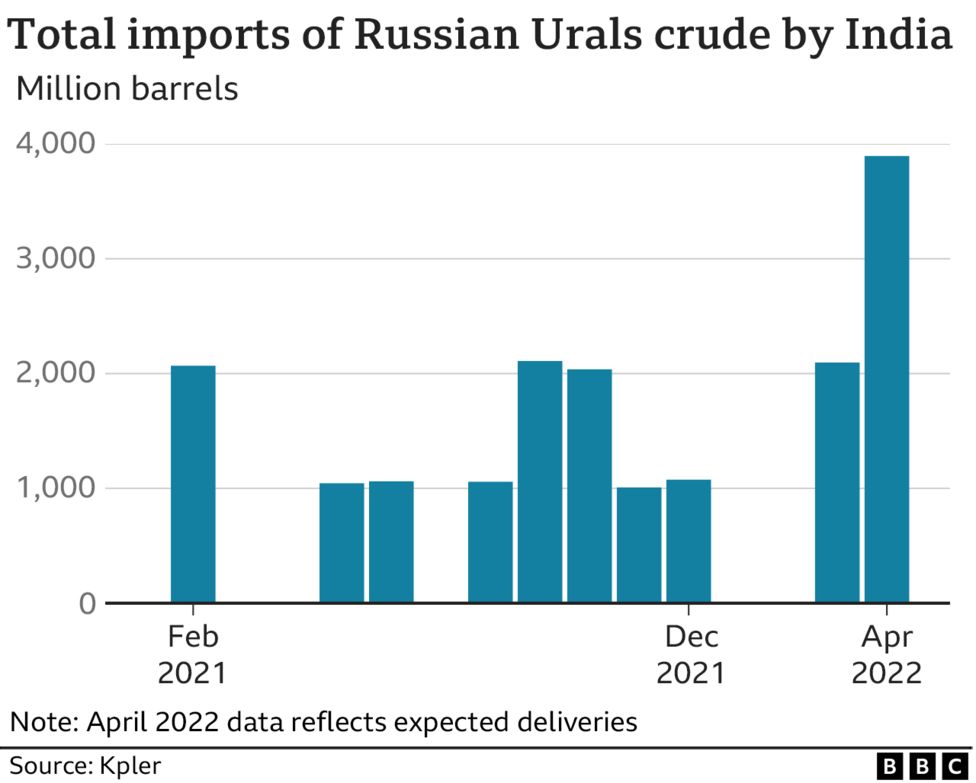 What's the deal India is getting?

Following its invasion of Ukraine, there are now fewer buyers for Russia's Ural crude oil, and its price has fallen.

"While we don't know the exact price that India is paying, the Urals discount to Brent crude [the global benchmark] in the last week has widened to about $30 per barrel," says Matt Smith, an analyst at Kpler.

These two types of crude normally sell at a similar price.

But at one point in March, as the price of Urals continued to drop, the difference between them reached an all-time record, he adds.

So "India and China are likely to purchase at least some of this [Russian] crude at a significant discount," he says. 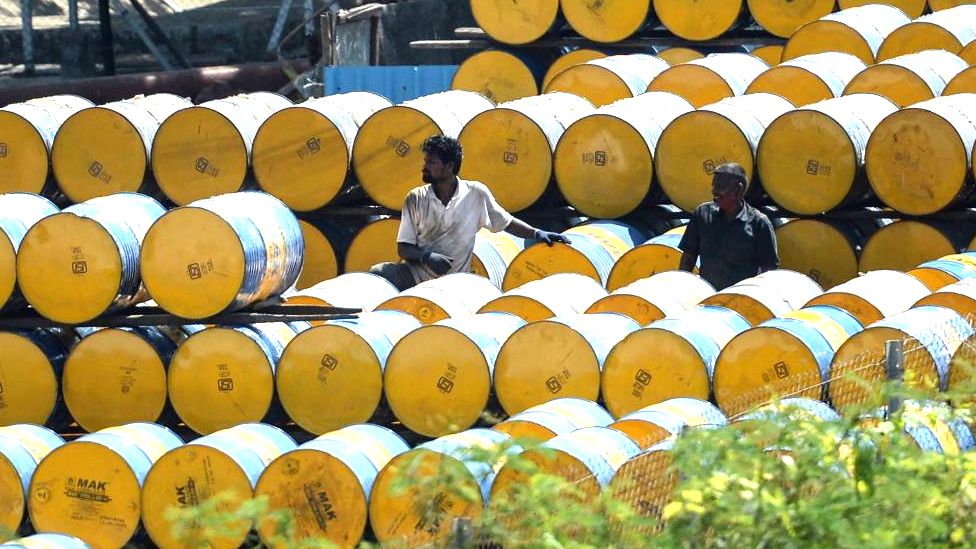 GETTY IMAGES | India imports more than 80% of its oil
What's the impact of financial sanctions?

India's big refining companies are facing a challenge trying to finance these discounted purchases, because of sanctions on Russian banks.

It's a problem facing trade in both directions.

One of the options India is looking at is a transaction system based on local currencies, where Indian exporters to Russia get paid in roubles instead of dollars or euros.

Where else is India looking to buy oil?

India's oil imports from the US have gone up significantly since February, according to analysts at Refinitiv.

However, market analysts say this may not be sustainable in the future as the US seeks to use its domestic oil production to replace supplies from Russia after its invasion of Ukraine.

There are also suggestions that trade with Iran could resume under a barter mechanism which Indian oil refiners could use to buy its oil. This arrangement stopped three years ago, when the US reimposed sanctions on Iran.

But this is unlikely to resume without a wider deal reached in international negotiations with Iran over its nuclear programme.