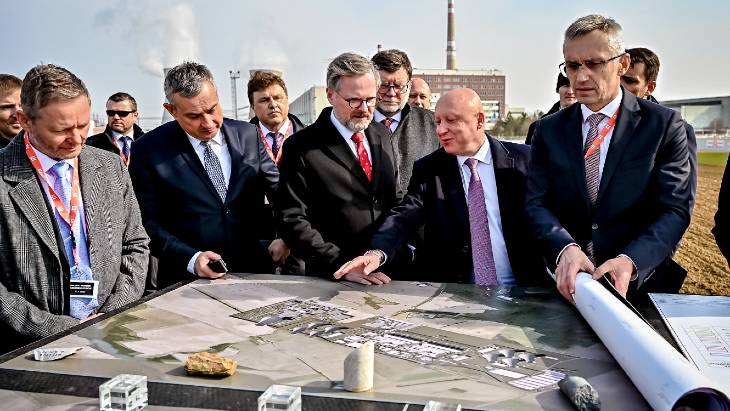 Czech Prime Minister Petr Fiala and ČEZ CEO Daniel Beneš (Image: ČEZ)
The bidders have until November to submit their initial bids, with ČEZ expecting to have evaluated the bids and submitted its report for state approval in time for finalisation of contracts in 2024.

"The main objective is a safe and economical project completed within the stipulated budget and time. For the tender itself, the goal is of course to select the best contractor and to have a quality and beneficial contract," said Daniel Beneš, Chairman of the Board of Directors and Chief Executive Officer of ČEZ.

"After its signing, the project documentation will be thoroughly prepared in order to minimise the problems surrounding some foreign projects. I believe that the 2036 start date for test operation of the new unit is achievable."

The new plant at Dukovany is due to be built next to the existing power plant, whose first unit was commissioned in 1985.

The Czech Republic already uses nuclear power for 34% of its electricity, generating this from four reactors at Dukovany and two at Temelin and is also looking at building new units at Temelin and last year support for new nuclear was signed into law.

The law was approved by a large majority in the Chamber of Deputies in September 2021, allowing a state-owned company to purchase electricity from new nuclear plants at a fixed rate for at least 30 years, with the possibility of extension. The power will be resold on the wholesale market and any profit or loss translated into an adjustment to power bills, although the government said it will set an upper limit on any extra cost. It is known as Lex Dukovany, after the power plant site where new build is planned.

"In addition to stable electricity supplies," Lex Dukovany reads, "nuclear power plants also enable the provision of stable heat supplies, which is another advantage due to the extensive system of central heat supply in the Czech Republic." Therefore, "nuclear energy has been identified as the primary means of ensuring energy security in the Czech Republic in the context of achieving the goal of a climate-neutral EU by 2050 due to its ability to ensure low-carbon, stable and cheap electricity supplies."