Spain Gets its First Industrial Renewable Hydrogen Plant in Mallorca

17 Mar 2022  by hydrogenfuelnews.com
Spain has just opened its first industrial renewable hydrogen plant, located in Lloseta, Mallorca, with a number of top country officials present for the ceremony. Francina Armengol, Balearic Government President, was there, as was its Vice President Juan Pedro Yllanes, who took part in the opening ceremony. Spanish Vice President Teresa Ribera was joined by Reyes Maroto, Minister for Industry, Trade and Tourism. 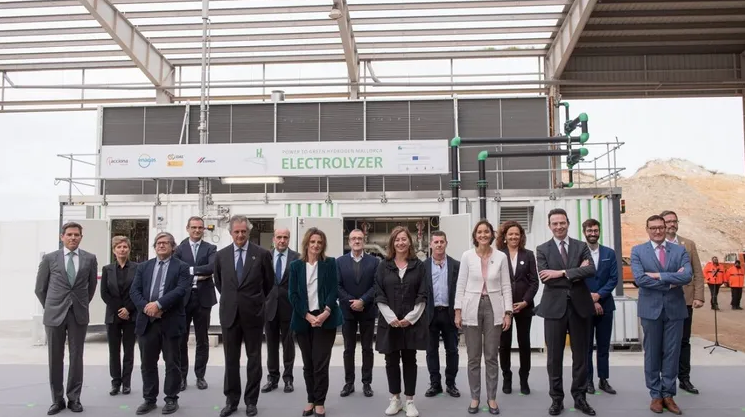 The project was led by Enagás and ACCIONA Energía, and IDAE and CEMEX were also participants.

The industrial renewable hydrogen plant produced H2 for the first time in December 2021. It is the result of the Power to Green Hydrogen Mallorca project. It will be a meaningful component of Spain’s broader effort to become the green H2 hub of note in Southern Europe. It is also a part of the European Green Hysland project and has become the first European funded H2 project powered by renewable energy in a Mediterranean country.

The industrial renewable hydrogen plant is the first H2 facility of its size in Spain.

In fact, it is the largest project in the country focused on the carbon emission-free fuel. Production on an industrial level will begin gradually and will grow based on infrastructure and equipment available for producing demand within the European-Funded Green Hysland Project, which is coordinated by Enagás.

That project supports infrastructure development for the construction of a complete green H2 ecosystem on the Spanish island of Mallorca. This would play an important role in achieving the Balearic Government’s decarbonization goals there.

The European Union issued a €10 million grant for the implementation of the renewable hydrogen plant and infrastructure project via the Clean Hydrogen Joint Undertaking.