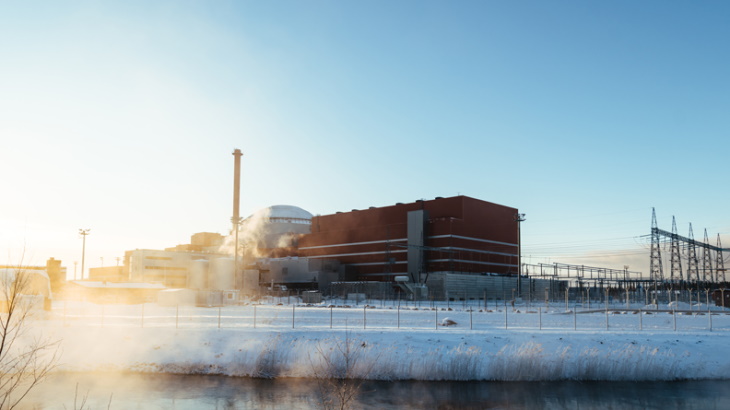 Olkiluoto 3 (Image: TVO)
Olkiluoto 3 (OL3) attained first criticality on 21 December, after which its power output has been gradually increased to approximately 27%. At 12.01pm on 12 March, the unit was connected to the grid at a power output of 103 MWe.

A test production phase, lasting about four months, will now follow during which OL3's power output will be gradually increased to 100%.

Once regular electricity production has started, OL3 will produce about 14% of Finland's total electricity consumption.

The Areva-Siemens consortium constructed the OL3 plant under a fixed-price turnkey contract. They have joint liability for the contractual obligations until the end of the guarantee period of the unit. Construction of Olkiluoto 3 began in 2005, with completion of the reactor originally scheduled for 2009, but the project has had various delays and setbacks.

The Finnish government granted an operating licence for OL3 in March 2019. Finland's nuclear regulator, STUK, granted a fuel loading permit in March 2021. Fuel loading was completed on 1 April, at which point an October start-up was envisaged. However, this was postponed to allow for extra turbine overhaul and inspection works by the plant supplier.

"When Olkiluoto 3 reaches full output, around 90% of Finland's electricity generation will come from clean, low-carbon electricity sources, with nuclear generation supplying around half of that. We congratulate the staff of TVO, the Finnish regulator STUK and all the companies involved for this great achievement."