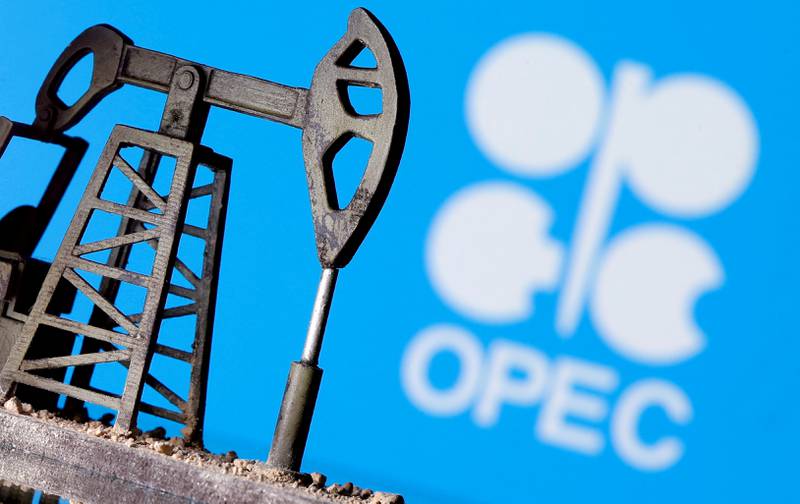 The “Declaration of Co-operation” with Russia and several other significant producers in December 2016 was thus a great coup of Opec policymaking. Reuters

Oil made the presidency of Vladimir Putin. Under him, an unprecedented co-operation with Opec was forged. Now the oil exporters’ organisation has to manage the market turmoil unleashed by his military offensive in Ukraine.

Mr Putin was plucked from apparent obscurity in August 1999 to become prime minister, then acting president. He came to office a year after Russia’s disastrous economic panic that was triggered by the Asian financial crisis and the slump in oil prices. Opec production cuts meant that, by then, oil prices were reviving solidly. Russia agreed to participate in managing output but did not follow this commitment.

Prices were given a further boost after George W Bush’s invasion of Iraq, then soared under the stimulus of the Chinese boom up to mid-2008. The all-time record of $147 per barrel in July 2008 would be almost $200 today, allowing for inflation.

Mr Putin used the windfall to tame the oligarchs who grabbed Russia’s natural resource wealth in the chaotic 1990s, either driving them into jail or exile and seizing their assets, as with Mikhail Khodorkovsky of Yukos, or taming them into loyal servants of the state.

Reliable aides, mostly from the security forces, were elevated to run the newly-assembled state companies. Notably this includes Igor Sechin, made chairman of Rosneft, which feasted on the carcass of Yukos to swell into the second-largest oil producing company in the world.

Mr Putin boosted petroleum tax collection, pursued asset strippers and followed a conservative monetary and fiscal policy, accumulating large currency reserves. After another oil price crash in the 2008-09 global financial crisis, Mr Sechin attended Opec meetings as an observer, encouraged the organisation to cut production and said his country was also doing so while in fact its exports rose 700,000 barrels per day.

So bringing Russia into alliance with Opec was always a great prize. Saudi Arabia and the organisation’s other leading lights had concluded by 2014 that they could not manage the shale boom without the assistance of major non-Opec competitors.

The “Declaration of Co-operation” with Russia and several other significant producers in December 2016 was thus a great coup of Opec policymaking. It has endured remarkably well since, despite occasional expressions of Russian frustration with its production limits, and a brief return to all-out competition in April 2020 as the pandemic collapsed demand.

But it was always fraught with risk. Russia is a producer of similar size to Saudi Arabia and has twice its gross domestic product. Unlike its Opec colleagues, it is also a great power militarily and holds a permanent UN security council seat. It can exert pressure and has interests in more and wider arenas than the oil market or the Middle East. Two of the members it brought into the alliance are former Soviet states where it has strong influence.

Opec is now in an entirely different market regime. Its greatest successes, sprinkled with some significant failures, have come in managing surplus: in the early 1970s, in 1999, 2009, 2016 and 2020-21. It has not covered itself in glory in coping with shortages. Usually, when supplies elsewhere are interrupted, Saudi Arabia has had to step in with its massive spare capacity.

But now, Amin Nasser, the chief executive of Saudi Aramco, observed at the CeraWeek conference in Houston that “Today, we [the world] only have 2 per cent of effective spare capacity…You need a resilient and strong spare capacity to make sure that you can absorb any supply shocks…Before the Ukraine crisis, the spare capacity was declining fast.” Several Opec+ members were heavily undershooting their targets even before the Russian attack.

Indeed, about 2 million barrels per day of unused capacity in the kingdom, somewhat over 1 million bpd in the UAE, smaller amounts in Iraq and Kuwait, is almost all that is available globally. Shale oil growth in the US is constrained, with the industry blaming Joe Biden’s policies and the President pointing to a lack of new investment.

Russia exports about 7.5 million barrels per day of crude oil and refined products. A loss of part of this by sanctions, trade disruption or deliberate action would be almost irreplaceable. For the next few years, there will be a hole in the market. Beyond that, Russian output will decline as it is starved of capital and technology.

Oil prices touched $130 per barrel last Monday before falling back after suggestions from Yousef Al Otaiba, the UAE’s ambassador in Washington, that the country favours “production increases and will be encouraging Opec to consider higher production levels”. Energy minister Suhail Al Mazrouei indicated that the UAE remains committed to the Opec+ agreement – but that does not rule out, of course, working within it.

This would be wise. Excessively high prices will trigger a global recession, improved energy efficiency and the rapid uptake of electric vehicles and other non-oil technologies. A few years of boom will give way to a long-lived, perhaps permanent, oil bust.

But outside the Gulf two (or, perhaps, four), other Opec+ states have little incentive to agree to higher production allocations which would reduce prices and which they can’t use. And given limited spare capacity, there is only so much the main Opec countries can do for now.

This demands some very clear communication. Opec or its leading lights need to reassure consumers as to how much spare capacity they hold, and that they are ready to deploy it in an emergency. And they need an escape route from the maze that Russia’s membership creates.