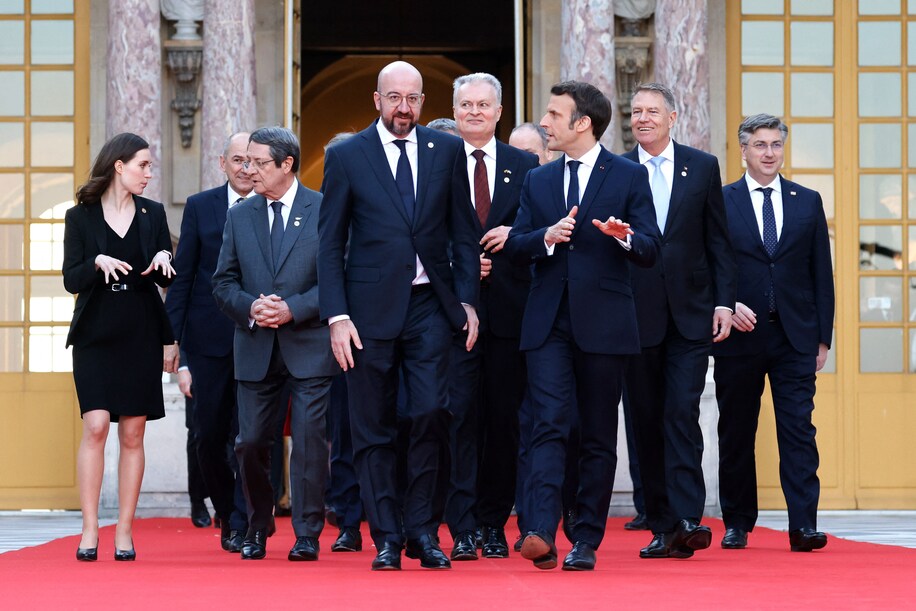 French President Emmanuel Macron and E.U. leaders arrive for a group photo at the Palace of Versailles, near Paris, on March 10. (Ludovic Marin/AFP/Getty Images)

The highest oil prices since the 2008 financial crisis are dealing a heavy blow to the global economy, slowing Europe’s pandemic recovery to a near stall and complicating the fight against inflation in the United States.

China, the world’s largest oil importer, will probably strain to reach this year’s economic growth target while developing countries in North Africa and the Middle East confront the danger of social unrest over rising energy and food costs, economists said.

The interruption of Russian oil shipments, including the U.S. import ban President Biden announced Tuesday, represents one of the largest supply disruptions since World War II, according to Goldman Sachs. With other major oil producers unable or unwilling to increase output in the short run, the per-barrel price of Brent crude, the global benchmark, hit $128 earlier this week, up nearly 65 percent since Jan. 1.

After falling Wednesday on hopes for a negotiated settlement in Russia’s war on Ukraine, Brent slid further Thursday, closing just shy of $110. But the likelihood that oil prices will remain elevated for the rest of the year is expected to reshape consumer spending, weigh on financial markets and strain government budgets in dozens of countries.

“This is going to feel pretty grim,” said Neil Shearing, chief economist for Capital Economics in London. “It’s not going to feel like the Roaring Twenties.”

The price jump since Jan. 1 — if sustained for a full year — would transfer more than $1 trillion from consumers to producers. And that figure does not include petroleum products such as diesel, gasoline or fuel oil.

For the United States, higher prices are a mixed bag. Drivers fumed this week when the average price of a gallon of gasoline surged to a record $4.32. But the shale oil revolution has made the United States one of the world’s largest oil producers, so higher prices boost oil company profits and investor returns.

One oil stock index has gained 29 percent this year while the broader S&P 500 fell by more than 11 percent.

Still, Capital Economics says it would take oil prices of $200-plus to trigger a U.S. recession. One reason is that U.S. households together have an ample $2.5 trillion savings cushion, dwarfing the estimated $150 billion to $200 billion cost to consumers of higher pump prices, said Ian Shepherdson, chief economist of Pantheon Macroeconomics.

Though Russia accounts for just 2 percent of the world economy, it is a major player in global energy markets. Russian wells supply 11 percent of global oil consumption and 17 percent of natural gas usage, according to Goldman Sachs.

Russian gas pipelines are critical to Europe’s economy, meeting 40 percent of European needs. Russian oil flows to refineries in Poland, Germany, Hungary and Slovakia. As a result, the hit to growth from higher oil and gas prices will be four times larger in Europe than in the United States, Goldman said.

For now, continued growth in the United States, China and India — accounting for nearly half of world output — should be enough for the global economy to avoid an outright recession, economists said.

The outlook is clouded, however, by the possibility that Europe’s worst conflict in more than 75 years could spill into a more damaging war at any time.

Predicting the future of Russian oil sales — and global prices — is especially hazardous. If U.S. allies in Europe overcome their economic worries and agree to a complete embargo on Russian energy, oil prices could hit $160 a barrel, according to Capital Economics. Bjornar Tonhaugen, an analyst with Oslo-based Rystad Energy, told clients this week that oil could hit $240 this summer in a worst-case scenario, according to a Bloomberg report.

Reaching those stratospheric levels would require more comprehensive energy sanctions than have been imposed so far.

To date, the United Kingdom has said it will wean itself from Russian oil imports by year’s end. The European Union announced a plan to cut its Russian gas purchases by two-thirds before 2030 and said it will take unspecified steps to eliminate oil and coal buys as well.

“We must become independent from Russian oil, coal and gas. We simply cannot rely on a supplier who explicitly threatens us,” European Commission President Ursula von der Leyen said Tuesday.

Even without additional government action, traders at companies like France’s TotalEnergies are shunning Russian crude. Finnish refiner Neste has said it shifted to non-Russian sources of crude. And fear of running afoul of allied sanctions on Russia prompted China’s largest two state-owned banks to decline to finance new purchases of Russian oil.

This “self-sanctioning” could idle 3 million to 4 million barrels a day of Russian oil, roughly 70 percent of the country’s total crude exports, according to the Oxford Institute for Energy Studies. Keeping that much supply off the market could add $25 to the cost of a barrel of oil.

Oil prices, which hovered around $65 a barrel in early 2020, traced an extraordinary arc over the past two years. In the pandemic’s first months, prices actually turned negative as a glut of oil left traders offering to pay storage facilities to take supplies. Prices have marched steadily higher over the past year as the economy gained ground.

There is little prospect of easily replacing lost Russian barrels. A resumption of Iranian exports is stalled by Moscow’s demand that its trade with Tehran be exempted from allied financial sanctions. Venezuela's dilapidated facilities would need to be refurbished before they could fill the void.

Near-term prospects for higher U.S. production are likewise limited. Burned by the last oil bust — and alert to Washington’s push for a transition to more environmentally friendly fuels — Wall Street has been unenthusiastic about funding expanded oil production.

The number of oil rigs in service has climbed steadily over the past year, but remains almost one-quarter below pre-pandemic levels, according to Baker Hughes, a Houston-based oil field services company.

“If this continues to escalate, we are looking at the ‘70s,” said Robert McNally, president of Rapidan Energy Group in Washington. “It’ll impart a sustained, grievous blow to the economy.”

Europe will be hit hardest. On Thursday, the European Central Bank acknowledged the war would have a “significant negative impact” on the euro-area economy and cut its 2022 growth forecast by half a percentage point, to 3.7 percent.

“Maybe growth is not negative, but it kind of kills the bounce back from covid,” said Sergi Lanau, deputy chief economist of the Institute of International Finance.

Central banks traditionally resist reacting to oil price movements, seeing them as a temporary influence on price levels. But with U.S. inflation at a 40-year high of 7.9 percent, and labor market conditions tight, the Fed is almost certain next week to raise its benchmark lending rate by a quarter point.

Higher oil prices could cause the Federal Reserve to move less aggressively on its rate-hike campaign, Goldman said earlier this week. Fed Chair Jerome H. Powell faces a tricky challenge: he must cool off the highest inflation in decades even as most economists expect it to decline over the rest of this year. And he must do so without tipping the $23 trillion U.S. economy into recession.

The balancing act may be even tougher in Europe, where the economy began the year with less momentum and yet consumer price inflation is at its highest since the introduction of the euro currency.

On Thursday, the ECB surprised investors by accelerating plans to withdraw its extraordinary financial stimulus, saying it would begin reducing its bond purchases in May and consider ending them this summer.

As the Fed begins tightening, many of them will be under pressure to act again to slow economic activity, even though their pandemic recoveries are not yet complete.

Governments in countries like Jordan, Lebanon and Tunisia, which protect consumers by subsidizing electricity prices, will struggle to afford those escalating costs. In January, Fitch Ratings warned that efforts to reduce fuel and utility subsidies “could spark social and political instability, particularly in Tunisia,” where the 2011 Arab Spring protests began.