Fuel Prices on Saipan up 20 Cents 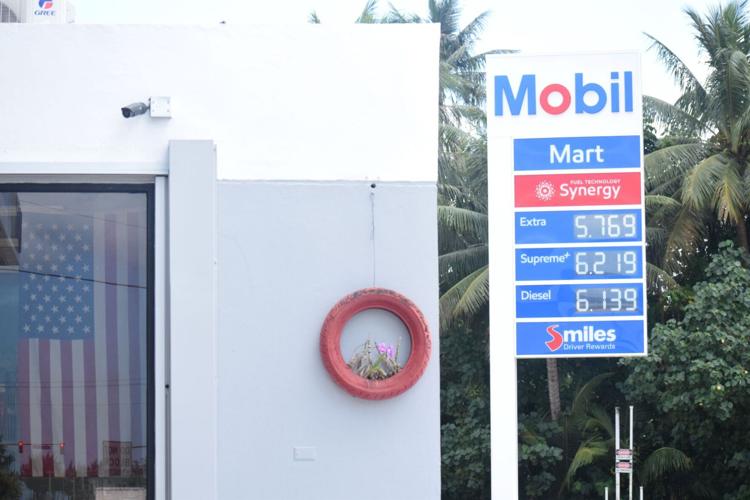 Mobil Oil Marianas in Chalan Kiya displays its new prices on Friday afternoon.
Photo by Emmanuel T. Erediano
FUEL prices on Saipan went up by 20 cents on Friday and Saturday as the Russian invasion of Ukraine continues to spook global markets.

In an interview on Friday, Sen. Edith Deleon Guerrero said, "I think it is important that we provide assistance to the people because obviously the rise in the fuel cost is very hard on families right now."

"We need to step in and do something to help the people," she reiterated, adding that “there’s a lot of American Rescue Plan Act money in the NMI government now.”

She said "it is important for the government to do something about this," referring to the recent increases in fuel prices.

"We understand that the fuel cost is going up all over the nation but it does not mean we can't help our people at least with $500 vouchers," she said.

For his part, Rep. Edwin Propst is urging the governor to “please give local stimulus to help ease everyone's pockets.”

He said gas prices are expected to further increase “at a time when people can barely afford to pay their utility bills — now is the time to provide much needed assistance."

According to CNET, “The cost of gasoline is heavily influenced by the cost of crude oil, which it's refined from. On Friday, the price of Brent crude, the international benchmark, settled at $118.11 a barrel, an increase of nearly 7% from Thursday. By comparison, crude oil averaged about $74 a barrel in December 2021.”

Moreover, “DTN senior market analyst Troy Vincent told CNET that ‘in a worst-case scenario, with Russian gas and oil fully cut from the global market,’ crude could go up to $130 a barrel, or even higher.”