01 Mar 2022  by championnews.com.ng
Crude oil prices went up to $104 per barrel on Monday following the ongoing Russia, Ukraine conflict. 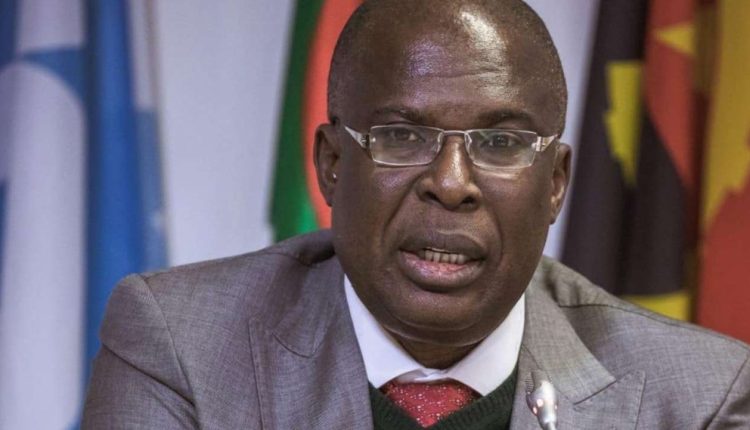 The News Agency of Nigeria (NAN) reports that Buhari said this on Monday in Abuja while declaring open the 5th Nigeria International Energy Summit (NIES).

The summit has as its theme: “Revitalising the Industry: ” Future Fuels and Energy Transition.”

Global crude oil prices went up to $104 per barrel on Monday following the ongoing hostilities between Russia and Ukraine.

Represented by Chief Timipre Sylva, Minister of State for Petroleum Resources, the president noted that the summit had been of great value in terms of policy input for government and business development resources for the private sector.

He said: ”Crude oil prices are on the rise again after turning negative in April 2020. It is a great opportunity for us as a country.

“With the PIA in place, there should be no excuses. The enabling investment environment which has been the bane of the industry has been taken care of by provisions in the PIA.

“There is now a level of certainty for the regulatory, administrative and fiscal framework and the legitimate grievances of host communities most impacted by activities of the industry has been addressed by the Act.”

Buhari said to demonstrate the government’s seriousness, the administration did not waste time with the implementation of PIA.

“We moved quickly and scrapped the existing agencies and replaced them with new ones. We have inaugurated their new Chief Executives too.

“We also ensured the incorporation of the Nigerian National Petroleum Company Limited (NNPCL) under the Companies and Allied Matters Act (CAMA).

“The NNPCL is a limited liability company now and our target is to make it the biggest, the most capitalised and the most profitable company in the whole of Africa,” he said.

The president further told the summit that Nigeria had adopted gas as its transition fuel as the world moves towards cleaner sources of energy.

He said this informed the administration’s Decade of Gas Initiative, which aims to transform Nigeria into a gas-based industrialised nation through enhanced and accelerated gas revolution.

“Given the country’s potential of about 600 trillion cubic feet, natural gas has the enormous potential to diversify and grow Nigeria’s economy.

”We are fully aware that energy transition raises the bar in terms of environmental, social and governance demands.

“We do not have to panic. We are already building blocks and bricks that will ensure seamless energy transition as the country joins in the race for net-zero carbon emission.”

The president said Nigeria was prepared to face the global demand for cleaner energy sources with the enactment of PIA, successful completion of the 2020 marginal oilfields bid round and the decade of the gas initiative.

“We are waiting to deliberate on the strategy paper from this summit and incorporate critical parts of it into government’s policies where necessary,” he said.

Global energy leaders are discussing the way forward and strategies for the management of Africa’s huge energy resources at the summit.

The summit, which opened on Monday, will end on March 3.

Meanwhile, the Organisation of the Petroleum Exporting Countries (OPEC) has said the global energy demand is set to increase from 275 million barrels of oil equivalent a day (mboe/d) in 2020 to 352 mboe/d by 2045.

”No single source of energy can meet this demand growth alone,” Barkindo said quoting OPEC’s World Oil Outlook, its flagship publication which looked at the longer term projections for the industry,

According to the secretary-general, the global population is expected to reach 9.5 billion people by 2045, an increase of 20 per cent.

“Demand for ‘Other renewables’ – combining mainly solar, wind and geothermal energy- represents the single largest incremental contribution to the future energy mix, rising from 6.8 mboe/d in 2020 to close to 36.6 mboe/d in 2045.

“Moreover, it is also the fastest growing energy source with its share in the global primary energy mix. This means renewables’ share of the energy mix is projected to rise from 2.5 per cent in 2020 to 10 per cent in 2045.

“Clearly, multiple sources of energy are required to meet this rise in demand. Oil is forecast to remain the fuel with the largest share of the global energy mix until 2045,” he noted.

“We need to ensure energy is accessible and affordable for all; we need to transition to a more inclusive, fair and equitable world in which every person has access to energy as referenced in UN Sustainable Development Goal Seven (SDG7).

“And we need to reduce emissions. It is an energy sustainability trilemma, with each piece having to move in unison.

“The challenge of tackling emissions has many paths, as evidenced by the Intergovernmental Panel on Climate Change, the United Nations Framework Convention of Climate Change (UNFCCC) and the Paris Agreement.

“It is not just one path for all, whether that be a country or an industry.

“The capacities and national circumstances of developing countries must be taken into account in all actions.

“In order to not render countries already struggling even more besieged, it is necessary to carefully consider the adverse socio-economic impacts on these countries due to mitigation activities, in order to identify remediation measures and share best practices,” he said.

He added that cumulative oil-related investment requirements amounted to 11.8 trillion U.S. dollars in the 2021-2045 period.

According to him, of this, 80 per cent, or $9.2 trillion is in the upstream, with another 1.5 and 1.1 trillion U.S. dollars needed in the downstream and midstream, respectively.

The OPEC boss said the investment requirements, clearly underlined that any talk of the oil and gas industries being consigned to the past and of the need to halt new investments in oil and gas was misguided.

”Any shortfall could have severe consequences, particularly if supply falls and demand does not. We could see crude oil and product shortages, all of which would have an impact on the global economy,” he said.

He said investing in technologies such as blue hydrogen and Carbon Capture Utilisation and Storage (CCUS), while harnessing the ‘reduce, reuse, recycle and remove’ carbon principles were all critical paths towards a sustainable society in Africa.

”These principles not only minimise the environmental impacts of Green House Gas (GHG) emissions, but also contribute to achieving socioeconomic development and prosperity,” he said.

Additionally, he said hydrogen production development could make Africa a net exporter in the global market.

He further noted that the unfortunate reality for developing countries was that a staggering 759 million people worldwide did not have access to electricity in 2019, with three out of four of them in sub-Saharan Africa.

Moreover, he said there were roughly 2.6 billion people or 34 per cent of the global population who did not have access to clean cooking fuels and technologies.

This, he said included a massive 70 per cent of Africans who had no access, exposing them to high levels of household air pollution.

According to him, the energy poverty numbers for Africa are stark and Africa accounts for less than three per cent of global emissions.

“As an industry, we must approach these critical issues together through dialogue and cooperation, ensuring that all voices are heard and all viewpoints are considered.

“In this manner, we can reinvent the industry to allow it to fit with a just, equitable and fair energy transition, where no one is left behind.” Barkindo noted.