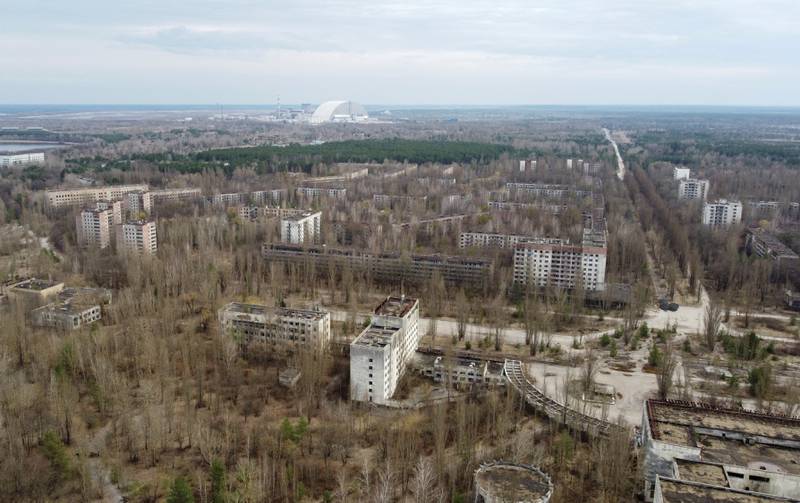 A new safe confinement building over the damaged fourth reactor at the Chernobyl nuclear power plant in April 2021. Reuters

The International Atomic Energy Agency on Sunday said it was calling an extraordinary meeting of its board of governors next week "to discuss the current situation in Ukraine".

The meeting will begin at 11am on Wednesday at the IAEA's Vienna headquarters, the agency said.

It said Director General Rafael Grossi "is actively in contact with all involved to ensure the safety and security of nuclear facilities and material in Ukraine".

Ukraine has four active nuclear power plants and stores of nuclear waste such as the one at Chernobyl.

Chernobyl was the site of the worst nuclear accident in history in 1986 and on Thursday it fell to Russian troops.

Ukrainian authorities said that radiation levels had increased there after the Russian takeover but the IAEA said the levels remained low and did not "pose any danger to the public".

The IAEA also said it had been told by Ukraine that "missiles hit the site of a radioactive waste disposal centre in Kiev overnight, but there were no reports of damage to the building or any indications of a radioactive release".

But Mr Grossi said such incidents "highlight the very real risk that facilities with radioactive material will suffer damage during the conflict, with potentially severe consequences for human health and the environment".

"Once again, I urgently and strongly appeal to all parties to refrain from any military or other action that could threaten the safety and security of these facilities," he said.

The meeting on Wednesday will be days before a scheduled board of governors meeting and coincides with a crucial phase of efforts to fully restore the 2015 deal on Iran's nuclear programme.

Diplomats from Britain, China, France, Germany, Iran and Russia have been taking part in talks on reviving the accord in Vienna, with their success or failure widely expected to hinge on negotiations in the coming days.

The US has been taking part in the talks indirectly.