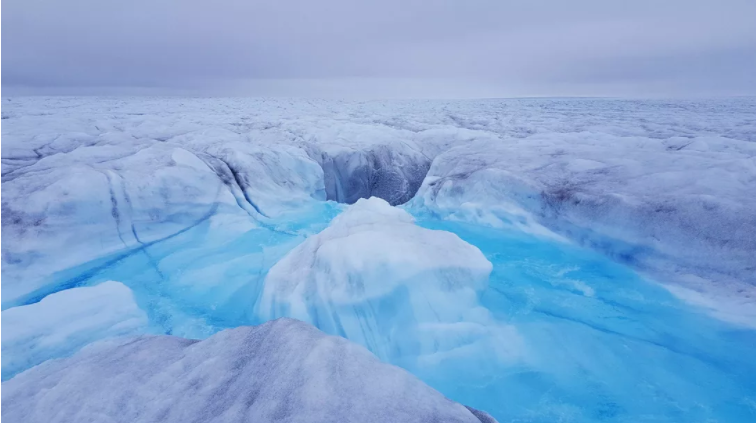 Water flowing into a moulin and down to the bed of Store Glacier, Greenland. Poul Christoffersen

The surface of the Greenland ice sheet is melting, creating a network of ephemeral rivers and waterfalls that scientists say produces more hydropower than the collective output of the 10 largest hydroelectric stations on the planet.

It's part of a brutal feedback loop brought on by climate change that could hasten the rise in sea levels around the world.

In summer, an increasing amount of the frozen surface melts, forming lakes and streams that rapidly make their way to the bottom of the ice sheet -- traveling downward as much as a full kilometer -- by rushing through cracks and large fractures. An international team of researchers set out to measure how much energy was created by this process.

"There's a lot of gravitational energy stored in the water that forms on the surface, and when it falls, the energy has to go somewhere," Cambridge University professor Poul Christoffersen explained in a statement.

Unfortunately, that energy is being converted to heat at the base of the ice sheet, leading to high rates of melting both on the top and bottom of the sheet.

The team used a kind of radar to measure the amount of melting and found rates often just as high on the bottom of the ice sheet as on the sun-splashed surface.

"The heat generated by the falling water is melting the ice from the bottom up, and the melt rate we are reporting is completely unprecedented," Christoffersen said.

The study is published in the latest issue of the Proceedings of the National Academy of Sciences.

The researchers calculate up to 82 million cubic meters of water fell from the surface to the base of Store Glacier on the Greenland Ice Sheet each day during the summer of 2014. They estimate that water falling to the bottom of the sheet produces more hydropower during summer than the world's top 10 hydroelectric generating stations combined.

"Given what we are witnessing at the high latitudes in terms of climate change, this form of hydropower could easily double or triple, and we're still not even including these numbers when we estimate the ice sheet's contribution to sea level rise," Christoffersen said.

It's too bad there's no practical way to capture this hidden hydropower, as all that clean energy could help reduce the emissions that are actually accelerating its creation.