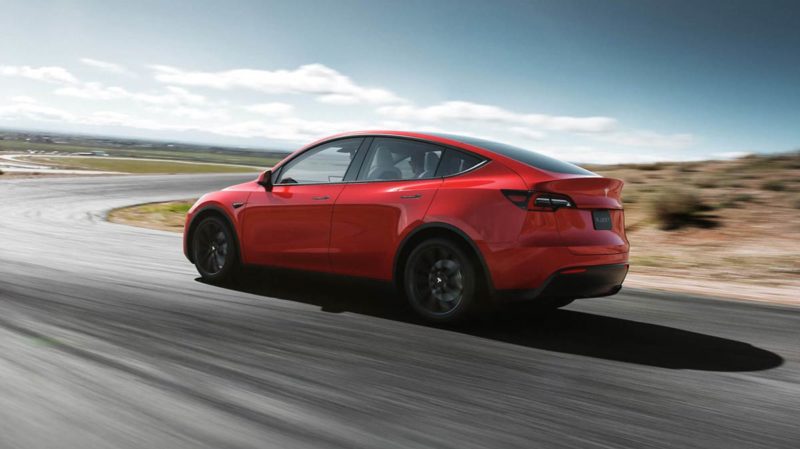 MODEL Y. SOURCE: TESLA
Hot on the heels of record-breaking sales numbers, Tesla has nabbed yet another award, this time for its mid-size electric SUV, the Model Y, which took home Cars.com’s Best Electric Vehicle of 2022 award.

Tesla has dominated headlines in the past few weeks thanks to various sales and delivery numbers. The Tesla Model Y, for example, was the best-selling luxury compact SUV in California in 2021, accounting for 44% of the segment.

This week, American online car-shopping marketplace Cars.com named the Tesla Model Y its Best Electric Vehicle of 2022 in its Best Of awards program.

It beat the 2022 Volvo XC40 Recharge Twin and the 2022 Ford Mustang Mach-E for Cars.com’s inaugural Best Electric Vehicle award, apparently due to its consumer “friendliness” and roominess.

“As EVs rapidly move from a fringe movement to the mainstream, this is the perfect award to kick off our Best of 2022 awards week,” said Joe Wiesenfelder, executive editor and head of EV insights for Cars.com.

“The quality and quantity of competitive vehicles poised to enter the EV space warrants expert scrutiny and independent comparison, and that’s what we do best at Cars.com.

“Tesla is an electric car innovator, and the Model Y reflects that leadership with its efficiency, charging capability, range, and options. It checks a lot of boxes for consumers who have been considering making the jump to an EV.”

As regards the competition, according to Cars.com, “Truth be told, they’re all just playing catch-up to Tesla.” This is evident in “Tesla’s track record of using the [over-the-air update] capability to improve and evolve the products” and in the brand’s popularity, which exceeds the lack of direct-to-consumer sales options in some US states.

Cars.com also highlighted the Tesla Model Y’s impressive range of 524-kilometres (EPA) for the Long Range All-Wheel Drive version, which the site says helps to ease range anxiety along with “actionable information about efficiency to inform drivers how to maximize remaining range.”

“Tesla’s network of Supercharger DC fast chargers is also larger and has been more reliable — and more reliably fast — than others in our experience,” Cars.com’s editors added.

The Tesla Model Y’s charging was yet another mark in its favour for the Cars.com editors, who wrote, “When charging, the Model Y’s efficiency translates to more miles of range per hour at a given power versus many EVs, and the Model Y can finely throttle charging to work with a variety of home electrical circuits.”

While there are claims that Tesla’s Model Y – which is not yet available in Australia – has surpassed 500,000 sales worldwide, given that Tesla rarely publicises its figures, and only provides quarterly production and delivery numbers that combine the Models S and X, and the Models 3 and Y, that number remains unverified.

If numbers aren’t enough to highlight the continued excellence and popularity of Tesla’s electric crossover, then the number of awards the company’s vehicles continue to rack up might make their case.

In the end, Tesla’s lengthy history as an electric carmaker gives it a currently insurmountable edge over other carmakers who have come late to the electric revolution. This will change, in time, as all technological shifts eventually reach a point of parity between manufacturers. But for now, it looks as if Tesla remains dominant ahead of a huge chasing pack.