23 Feb 2022  by greencarcongress.com
MAN Truck & Bus is accelerating the production of heavy-duty e-trucks in Munich to as early as the beginning of 2024 with prompt delivery of an initial 200 units. This is almost a year earlier than originally planned. In addition, the depth of added value for battery-electric commercial vehicles is to be increased, with in-house assembly of the so-called battery packs.

MAN began building up its own expertise in the assembly of battery packs as early as spring 2021. The nucleus for this is the eMobility Technical Center at the Nuremberg site, where the first battery packs for e-vehicle testing and internal tests have since been produced in individual production.

MAN presented a near-production prototype of the new electric truck at an event in Nuremberg. 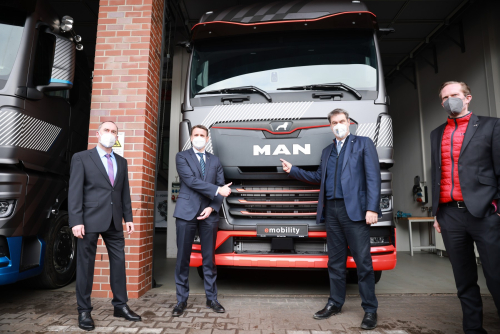 In front of the near-production prototype of the MAN electric trucks, which was shown for the first time in Nuremberg (from left to right): Hubert Aiwanger, Bavarian Minister of Economic Affairs, Alexander Vlaskamp, CEO of MAN Truck & Bus, Dr. Markus Söder, Minister President of Bavaria, and Dr. Frederik Zohm, CTO of MAN Truck & Bus

In addition to the new emission-free drives, MAN is developing comprehensive eMobility solutions that prepare customers for vehicle use at an early stage.

In addition to accelerating the ramp-up of electric mobility, the commercial vehicle manufacturer is intensifying its research into hydrogen mobility. To this end, Bavarian Minister-President Markus Söder and Bavarian Minister of Economic Affairs Hubert Aiwanger presented a funding commitment of €8.5 million for the “Bavarian Fleet” (Bayernflotte) project. In 2024, MAN trucks with hydrogen fuel cells are to prove their suitability at five customers in Bavaria. 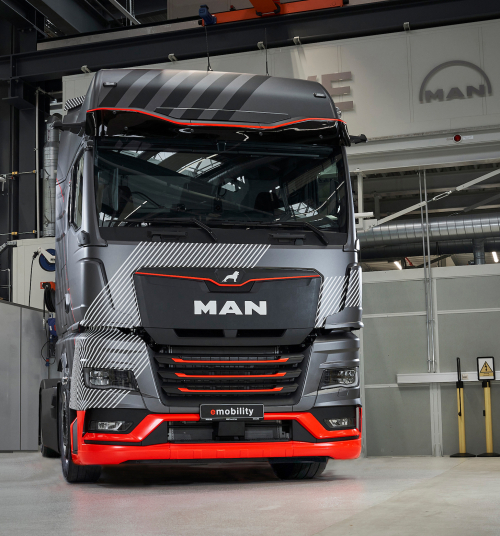 MAN is accelerating its transformation and taking big steps towards emission-free drive systems. Our focus at MAN and in the TRATON Group is clearly on battery-electric drives. They form the basis for our heavy-duty e-trucks, which we will be launching on the market from 2024. Only when sufficient green hydrogen and the corresponding infrastructure are available well after 2030 do we expect to use H2 trucks in selected areas of application. That is why we are researching the topic of hydrogen and the funding from the state of Bavaria enables us to build up further expertise in the field.

—Alexander Vlaskamp, Chairman of the Executive Board of MAN Truck & Bus

In the Bayernflotte project, MAN is developing a fuel cell truck together with its industrial partners Bosch, Faurecia and ZF. This will be delivered to five customers in mid-2024. The companies BayWa, DB Schenker, GRESS Spedition, Rhenus Logistics and Spedition Dettendorfer will test their hydrogen-powered fuel cell trucks in real-life operations for one year.