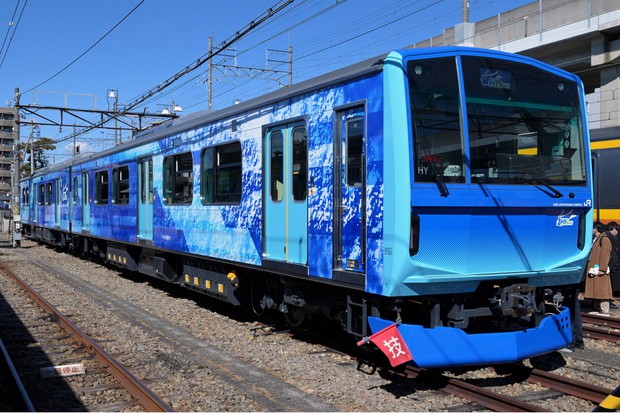 The blue exterior of the fuel cell and rechargeable battery hybrid test train "Hybari" is seen in the Kanagawa Prefecture city of Kawasaki's Nakahara Ward on Feb. 18, 2022. (Mainichi/Takehiko Onishi)
JR East intends to put the technology to practical use in 2030. The train emits no carbon dioxide (CO2) thanks to its hybrid system of hydrogen fuel cells and rechargeable batteries. For the time being, JR East will conduct tests on lines including the JR Tsurumi and Nambu lines from late March. 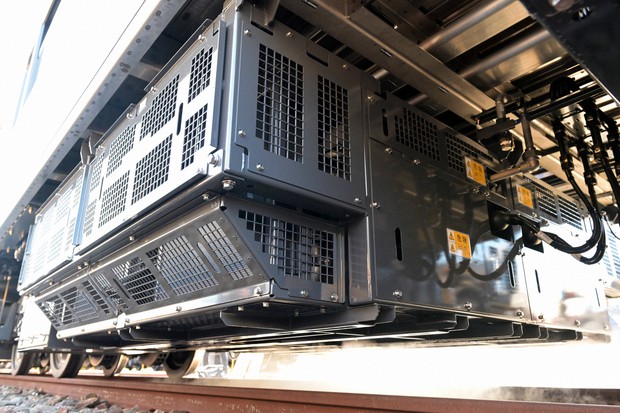 Fuel cells are seen under the floor of test train car "Hybari" in the Kanagawa Prefecture city of Kawasaki's Nakahara Ward on Feb. 18, 2022. (Mainichi/Takehiko Onishi)KAWASAKI, Kanagawa -- Japan's first test train car capable of running while generating power using hydrogen was unveiled to reporters in this city south of Tokyo by the East Japan Railway Co. (JR East) on Feb. 18.
The "Hybari" train was developed by JR East, Hitachi Ltd. and Toyota Motor Corp. Hydrogen in the tank above the train car roof is sent to fuel cells under the floor, and generates electricity through a chemical reaction with oxygen in the air. JR East intends to use the technology in the next generation of train cars as part of its goal to emit effectively zero CO2 in fiscal 2050.

The blue test car exterior features a water splash design, which references the water formed in the chemical reaction. To confirm the system's performance and energy efficiency, tests will be conducted at night, about once a week, without passengers.

Shoichi Oizumi, director of the JR East research and development center, said, "It uses clean energy, and will have a role in the coming age."