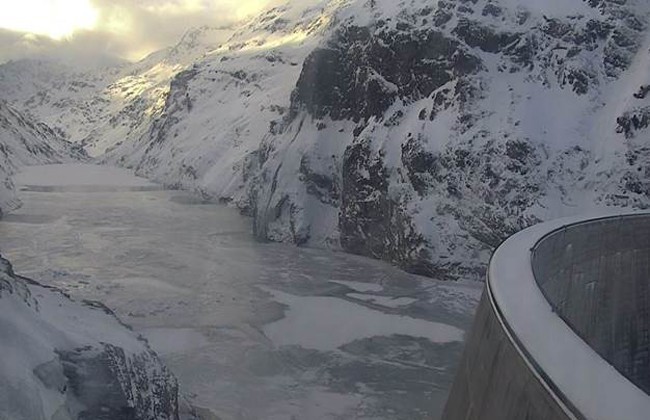 The 138 MW Mauvoisin hydro project will provide electricity to Nestle Switzerland (photo courtesy Axpo)
To strengthen security of supply, the Swiss Federal Council has adopted measures to set up a hydroelectric reserve and has instructed the Federal Department for the Environment, Transport, Energy and Communications (DETEC) to draw up the necessary provisions for the construction and operation of power plants to cover peak loads.

Reserve power plants, operated in a climate-neutral way, must be available in the event of an extraordinary shortage, the Federal Council said. DETEC will also formulate measures to improve electrical efficiency.

For background: The Federal Electricity Commission (ElCom) has drawn up a “concept relating to gas-fired power stations intended to cover peak loads” and the Federal Office of Energy (SFOE) has analyzed electricity efficiency measures that can be implemented at short notice. The risks incurred by Switzerland in terms of electricity imports, which are likely to increase from 2025, were the trigger for preparing this data. In the most pessimistic scenario, the simultaneous failure of several large power plants in Switzerland and abroad during the winter could lead to a shortage situation lasting a few hours.

As a first insurance solution in the event of shortages, the Federal Council decided to set up a hydroelectric reserve from winter 2022/2023. The operators of hydroelectric storage power stations must retain, against payment, a certain quantity of energy that they make available in case of need. Initially introduced by ordinance, the hydroelectric reserve will be regulated in the current revision of the law on electricity supply (LApEl).

DETEC will also immediately start the preparatory work for a possible call for tenders for power plants serving as a reserve. This will include defining the sizing and developing a detailed concept on the technologies and sites to be preferred. Emphasis should be placed on existing and currently unused infrastructure, and the possibilities for authorization should be examined on the basis of cantonal legislation and cantonal spatial plans. These reserve plants will serve as a second insurance solution and should optimally complement the hydroelectric reserve.

In parallel, DETEC will draw up the legal framework that will be submitted to Parliament in the context of the ongoing revision of the LApEl. The provisions must ensure that these power plants are operated in a climate-neutral way, for example by using fuels that do not emit CO2 or by offsetting emissions. DETEC will report to the Federal Council by the end of June 2022 on the progress of the implementation in Parliament and within the Federal Administration.

DETEC will regulate the coordination between the two reserves, and the costs generated will be borne by the end consumers. The two reserves should only be used in exceptional circumstances, when the electricity market is temporarily unable to meet demand. They must not distort the market.

The Federal Council based its decisions on the concept of ElCom, which provides for the construction, staggered over time, of two or three gas-fired power stations, with a total capacity of up to 1,000 MW, intended to supplement the hydroelectric reserve.

According to the International Hydropower Association’s 2021 Hydropower Status Report, Switzerland has 16,881 MW of installed hydroelectric generating capacity, including pumped storage.