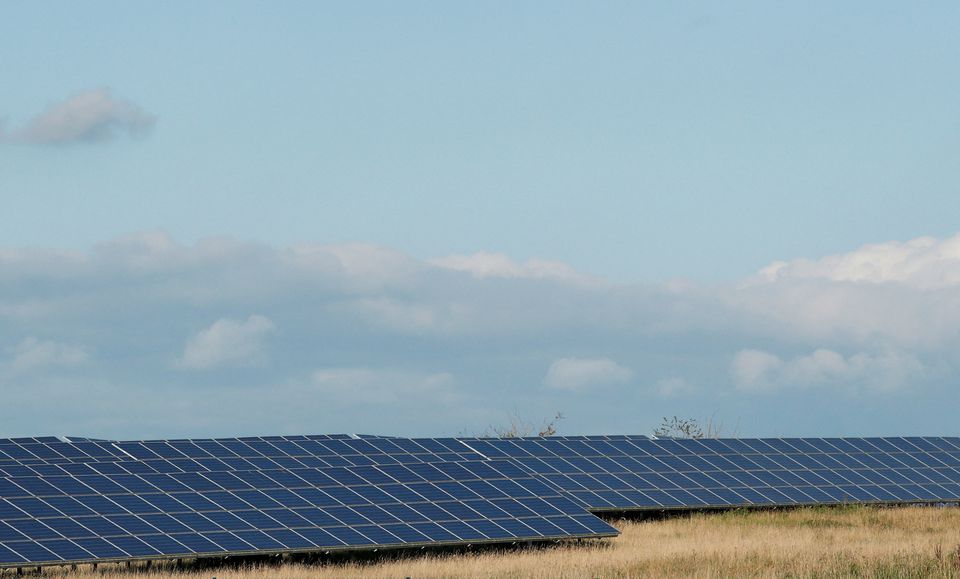 A general view of solar panels at Westmill Wind Farm & Solar Park, which is owned by the community and supports local renewable energy, at Watchfield, near Swindon, Britain, September 24, 2021. REUTERS/Andrew Boyers

Britain's National Grid said on Monday it will be able to obtain grid stability services from renewable power generators for the first time, in the path to decarbonising the power sector and as more fossil fuel generators go offfline.

Britain has a target to reach net zero emissions by 2050 which will require a huge increase in the amount of renewable energy as it moves away from fossil fuels such as natural gas and coal.

Traditionally, conventional power plants such as gas or coal have provided balancing services through contracts to keep the grid stable to ensure reliable electricity supply. But as older coal and gas plants are retired, there need to be more ways to provide grid stability.

The UK government has a target to generate 40 gigawatts (GW) of electricity from offshore wind by 2030 - up from around 10 GW currently - which it says would be enough to power every home.

"From today wind, wave and solar generators will be able to offer the kind of stability services which have traditionally been delivered by conventional generators," National Grid's Electricity System Operator said in a statement.

It said it has changed the GB Grid Code, a rulebook for what connects to the grid, so that renewable generators and power interconectors will be able to compete to provide grid stability services, alongside fossil fuel generators which are directly connected to the transmission system.

Having a stable grid is crucial to delivering reliable electricity supply. It ensures a steady frequency of 50Hz is maintained and voltages don't fluctuate which also protects equipment, National Grid ESO said.

"This supports the transition of the system away from conventional fossil fuelled generation, ensures continued system security as this transition takes place and saves consumers money by helping the ESO to efficiently operate the system," it added.