14 Feb 2022  by reuters.com
Asian shares sagged on Monday as warnings that Russia could invade Ukraine at any time sent oil prices to seven-year peaks, boosted bonds and belted the euro. 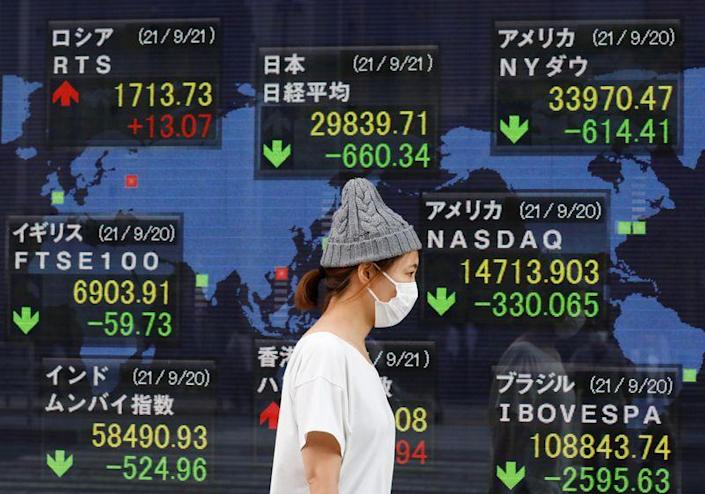 FILE PHOTO: A woman wearing a protective mask, amid the COVID-19 outbreak, walks past an electronic board displaying Japan and other countries' stock indexes outside a brokerage in Tokyo, Japan, September 21, 2021. REUTERS/Kim Kyung-Hoon
The United States on Sunday said Russia might create a surprise pretext for an attack, as it reaffirmed a pledge to defend “every inch” of NATO territory.

S&P 500 futures were down a fraction and Nasdaq futures eased 0.1% after steep losses on Friday. EUROSTOXX 50 futures shed 1.8% and FTSE futures 0.7%.

Markets have been in convulsions since an alarmingly high U.S. inflation reading sparked speculation the Federal Reserve might raise rates by a full 50 basis points in March.

There was even chatter about an emergency inter-meeting hike. That was spurred in part by the timing of a closed Fed Board meeting for Monday, though the event seemed routine.

The talk was tamped down when the Fed released an unchanged bond buying schedule for the coming month, since the central bank has said it would only hike after its buying had ceased.

San Francisco Fed President Mary Daly also played down the need for a half-point move in an interview on Sunday, saying being too “abrupt and aggressive” on policy could be counter-productive.

Futures markets since have scaled back the risk of a half-point rise to around 40%, when it had been priced as a near certainty at one stage last week.

“Broad-based inflation pressures have given rise to earlier-than-expected pressure for a synchronised shift toward restrictive policy across the globe,” said JPMorgan chief economist Bruce Kasman.

“But we do not expect it to translate into aggressive action in March,” he added. “In part, this reflects uncertainties related to Omicron, geopolitical tensions, and the purchasing power squeeze from high inflation—all of which weigh heavily on current-quarter growth.”

Attention will now be on an appearance by St. Louis Fed President James Bullard later on Monday, given he recently called for 100 basis points of tightening by June.

All the rate chatter sent Treasury yields to peaks last seen in 2019, before geopolitical tensions prompted a safe-haven rally late on Friday. Yields on 10-year notes were last at 1.94%, having been as high as 2.06% last week.