18 Jan 2022  by World Nuclear News
Licensing work for the planned Hanhikivi 1 nuclear power plant in Finland has progressed "to the homestretch", with the final licensing materials expected to be submitted to the nuclear regulator over the next couple of months, Fennovoima has said. 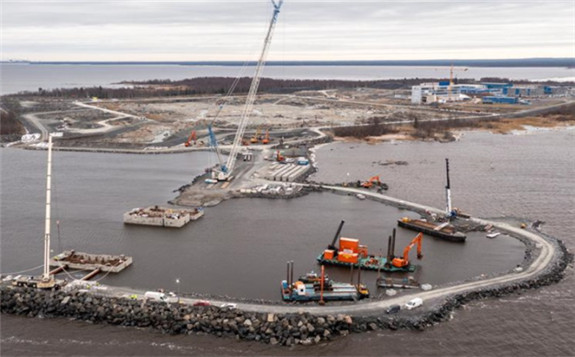 Fennovoima said licensing work for the project progressed steadily during 2021, with additional licensing material submitted to the Radiation and Nuclear Safety Authority (STUK) for approval in late autumn. By the end of December, it had submitted 12.5 of the 15 batches of the Preliminary Safety Analysis Report to STUK. Fennovoima said it will submit the final licensing materials to the authority during January and February.

"Our goal is to obtain a construction license during 2022," said Fennovoima COO Philippe Bordarier. "Once we have submitted the last licensing materials to STUK, the necessary discussion with the authority will continue."

In late-December, Fennovoima submitted construction licensing material for the plant's interim used fuel storage facility (ISFS) to STUK for conditional approval. The construction of the used fuel facility will begin sometime after the nuclear power plant is completed.

"The ISFS is a nuclear facility, the design of which follows the same safety principles as the nuclear power plant design," said Antti Ikonen, Fennovoima's project manager for nuclear waste solutions. "That's why we want to take into account the development of technology and the experience gained from the nuclear power plant design and construction to get the best possible solution."

"Before the construction of a nuclear power plant can begin, we must be granted the construction licence in accordance with the Nuclear Energy Act and necessary building permits by Pyhäjoki municipality," said Karri Huusko, Fennovoima's unit manager.

The Hanhikivi 1 project is actively preparing for the construction phase of the power plant, which will begin in the summer of 2023. In 2021, earthworks started in the main pit that will be continued during 2022.

The plant supplier RAOS Project has continued preparation works in the main pit during the autumn. Fennovoima said the pace of excavation will accelerate in the following months as work moves towards the final foundation level, nearly 18 metres below sea level.

During the late autumn, the first permanent concrete structures, the caissons of the culvert structure, were installed in the standby seawater intake channel. The culvert prevents sedimentation and ice from transferring into the plant's harbour.

During recent months, works on the Fennovoima's Administrative Building site moved indoors. The six-storey office building is scheduled to be completed in 2022.

About 500 people are currently involved on the Hanhikivi 1 site works every day. This year, the number of workers at the site will increase by 100-200. At the peak of construction, the highest number of people involved in constructing the nuclear power plant will be around 5500.

Fennovoima signed the plant supply contract for Hanhikivi with Rusatom Overseas - Rosatom's nuclear power plant exports subsidiary - in December 2013. Rosatom offered to build a plant using a 1200 MWe AES-2006 VVER under a fixed-price contract. The Hanhikivi project is owned by Fennovoima, in which a 34% stake is held by RAOS Voima Oy, the Finnish subsidiary set up in 2014 by Rosatom for the purpose of buying a share in the company.