RWE and power producer Northland Power have partnered to co-develop a 1.3GW cluster of offshore wind farms in the German North Sea. 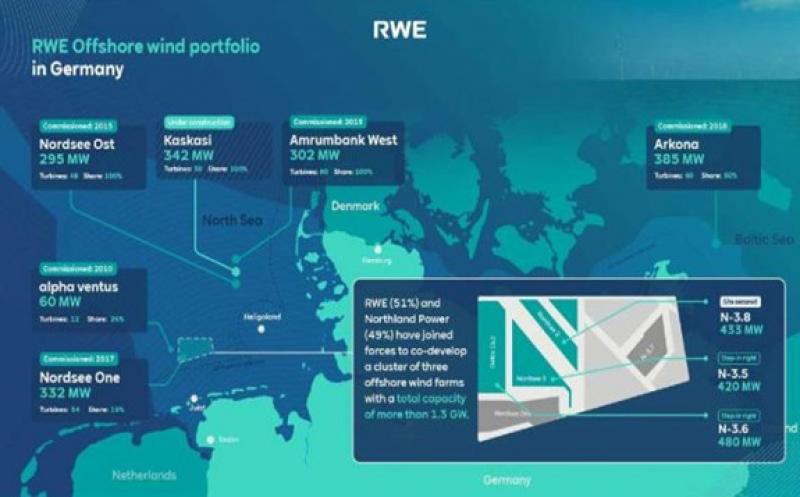 The newly established joint venture will develop and construct three wind farms north of the island of Juist, which are all expected to start commercial operation between 2026 and 2028.
The other two leases will add a further 900MW of capacity and are expected to be auctioned in 2023.

Mike Crawley, President and Chief Executive Officer of Northland Power, said: “We are proud to enhance our partnership with RWE to form the cluster to further strengthen our position in the North Sea. This cluster will provide us with significant size and scale and allows us to support the decarbonisation efforts in Germany.”

To form the new North Sea Cluster, Northland Power and RWE will develop the offshore site N-3.6 (previously known as Delta Nordsee 1&2), which has a planned capacity of 480MW.

The cluster will be in close proximity to the existing 332MW Nordsee One wind farm in which Northland and RWE are partners already.

The first offshore site (N-3.8), secured in Germany’s latest wind auction, has a capacity of 433MW. Sven Utermöhlen, CEO Wind Offshore, RWE Renewables, said: “Germany has set itself ambitious climate targets, thereby establishing a significant growth potential for renewable energies. Offshore wind power plays a central role in this and is indispensable for supporting the decarbonisation of industry in particular.

“RWE is making its contribution to this and is significantly stepping up the pace here. This includes the collaborative delivery of the 1.3 GW offshore cluster with Northland Power, through which we can achieve considerable synergies to deploy at our new wind farms, while at the same time actively supporting the energy transition in our home market Germany.”

According to RWE, RWE Renewables will hold a 51% stake in the new joint venture and Northland Power 49% of the shares.