Stewiacke Powering up Solar Field Just in Time for Christmas

Stewiacke has had a banner year, but it is about to enter an even brighter 2022. 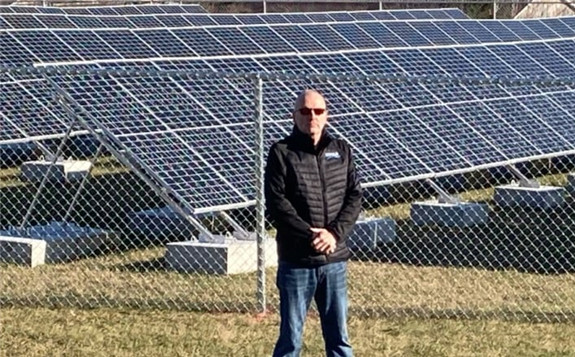 The town plans to flip the switch on its new solar field of 240 panels next week, and start feeding 72 kilowatts to the provincial electrical grid.

"It's just going to be really fun to watch, and it's kind of like the perfect Christmas gift for the town," CAO Dale Bogle said Saturday alongside Mayor George Lloy.

The Stewiacke project has been in the works since 2019. The town was one of 26 successful applicants to be a part of the Solar Electricity for Community Buildings Program.

The program allows communities, groups, or non-profit organizations to add solar systems to their buildings or land and sell the energy generated to Nova Scotia Power under a 20-year contract.

Bogle estimates the town could bring in about $30,000 to $45,000 in yearly revenue with the current number of panels. This will provide an estimate of how much can be brought in with thousands more panels, Bogle said.

The town hopes to expand the project, Bogle said, since the current panels take up only a small portion of a 2.83-hectare plot near the community centre.

There is no need to stop there, Bogle said, since, at 17.6 square kilometres, Stewiacke has the third-largest land mass of any town in the province.

Only about 35 per cent of town land is occupied, Bogle added, and its central location in the province means it gets very little fog — all good signs for solar expansion.

"I was quite surprised actually to see what we can work with. And a lot of towns are having the issue [that] they're running out of space," Lloy said.

Bogle said since the new panels will likely last more than 40 years, the town can either renew the contract when it's up or completely power its municipal buildings with solar electricity.

Once the $250,000 investment to install the solar panels is paid, Bogle said it will then use the income to start paying for other town projects.

The launch of the solar project comes after a year of "unprecedented" growth for the town, even during the COVID-19 pandemic, Lloy said.

That includes $11-million in building permits this year which is "off the charts," Lloy said, and around 200 people moving in over the past two years.

The 2016 census had Stewiacke's population at 1,376 but Bogle thought it was low. The latest 200 new residents would bring the population to roughly 1,700, Bogle estimates, and said Stewiacke could double in size over the next five years if this trend continues.

Lloy said he's heard anecdotally of local houses selling after just hours on the market, and people moving to the area from Ontario. Stewiacke's location, a combination of rural beauty still near a highway and half-hour drive to the Halifax airport, is a major draw, Lloy said.

Looking ahead, Bogle thinks Stewiacke could follow the lead of Antigonish, Berwick and Mahone Bay who all have solar gardens and plan to meet the federal government's 2050 goal of net-zero emissions.

That goal would be even more achievable with a regional approach in Colchester County, Bogle said, bringing multiple municipalities and groups together so "we all benefit."

In a time when rural municipalities are in financial trouble and considering dissolving, Bogle said green initiatives like solar projects are both a draw for residents and revenue boon.

"It's time that we start putting our minds together and move forward. And I think we can do it faster collectively," Bogle said.

The Nova Scotia government recently passed legislation enshrining in law the goal of supplying 80 per cent of the province's electricity using renewables by 2030.