The transport and supply of 5 of the 11 renewable hydrogen storage tanks to the largest plant in Europe for the production of this gas by water electrolysis that Iberdrola is building in Puertollano has begun. 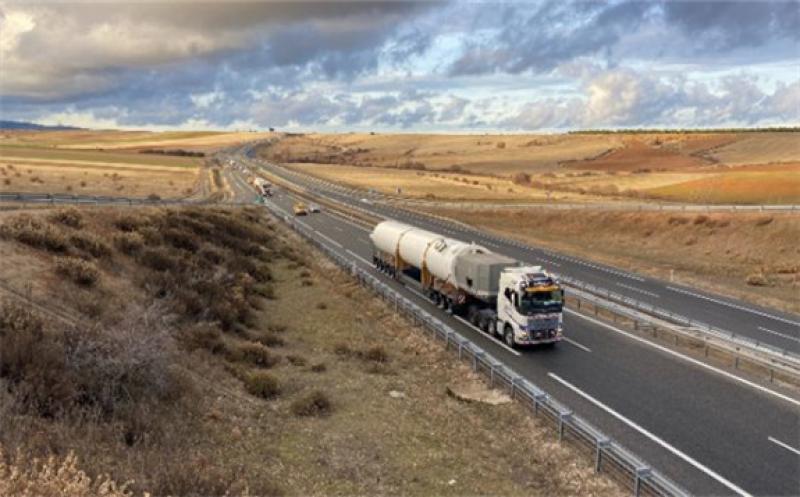 The storage of green hydrogen is essential to guarantee the stability of supply required by industry and to make efficient use of renewable energy production. These tanks manufactured in Asturias allow the storage of 2,700 kg of green H2 at 60 bars.

Each tank has a volume of 133 m3 and dimensions of 23 metres high and 2.8 metres in diameter. Each tank weighs 77 tonnes empty and two cranes will be used to assemble it, a main crane with a capacity of 600 tonnes and a smaller auxiliary crane. The tanks are made of a special steel to contain hydrogen given the small size of this particle and the thickness of the sheet metal is 47mm.

The tanks will begin arriving today, Monday 13 December, at Puertollano, their final destination. The manoeuvre for the tanks to enter the site will be carried out in reverse in order to comply with the turning radii required by the presence of the existing Fertiberia plant and the green hydrogen plant built by Iberdrola.

Green hydrogen has a very high potential as an energy vector, mainly for the electrification of industrial processes and heavy transport. It has also been identified as a key solution for the decarbonisation of the economy and for developing innovative industrial chains with high added value in Spain and the European Union.

Iberdrola has developed a project for the construction of more than 800 MW of electrolysers to produce green hydrogen and later green ammonia and fertilisers in four phases, in Puertollano (Ciudad Real) and Palos de la Frontera (Huelva), until 2027.

The initiative represents an investment of 1.8 billion euros and could make Spain an industrial leader in the green hydrogen sector and the first country with 100% production of ammonia for fertilisers that is completely green.

Iberdrola has submitted 53 projects related to green hydrogen to the Next Generation EU programme, which would trigger investments of 2.5 billion euros to achieve an annual production of 60,000 TN. The green hydrogen production capacity would be equivalent to 20% of the national target (installed capacity of 4GW in 2030) and would ensure that around 25% of the hydrogen currently consumed in Spain would not generate CO2 emissions. This and other Iberdrola hydrogen projects are expected to boost economic growth and employment, contributing to the creation of approximately 4,000 skilled jobs at 500 local suppliers.