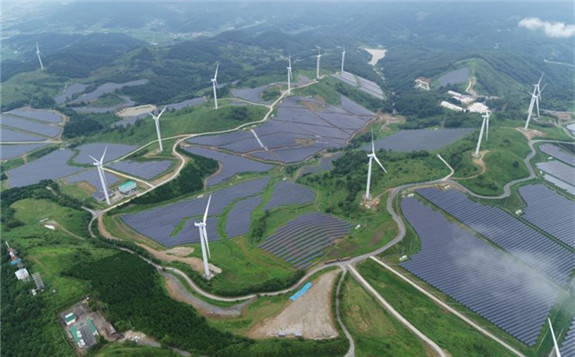 Marking the one year anniversary of the plant's operation, LS Electric opened the facilities to a few reporters, including The Korea Times, Nov. 15.

After a drive along curvy mountainous roads, the sheer size of the solar power plant, with hundreds of thousands of solar panels neatly aligned throughout the mountainous terrain, was revealed.

On top of the mountain is the integrated control center with a power management system that checks on the amount of electricity generated in real-time as well as the status of the overall solar panel array under surveillance from hundreds of cameras installed throughout the premises.

"Currently the power plant generates 30 megawatts of power on average daily and it is set up to be optimized for the summer season with the average coming out to 60 megawatts during that time," an LS Electric official said.

With the establishment of the LS power facilities the region has become a key location of renewable energy from both wind and solar power generation.

The power plant is the size of 150 soccer fields and is said to be one of the largest in Korea. Some 233,000 solar modules measuring 1m in width and 2m in height are sparsely arranged throughout the mountain.

"Since the site is in a mountainous area, the number of area that can be developed is been limited and so this is the reason the solar panels are sparsely installed over the mountain," Lee Geun-woo, the project integration team leader, explained.

The permitted area to build the facilities was on 2.96 square kilometers of land, however, the power plant takes up only 40 percent of this 1.2 square kilometers to better preserve the mountainous area as much possible, according to the company.

The solar power plant was built on one of the largest sections of the land and did require the cutting down of some trees to make way for the facility.

LS Electric was awarded an engineering, procurement and construction (EPC) contract in which the company took charge of the design, manufacture, purchase, delivery and construction of the solar power generation facility, as well as constructing a 251-megawatt-hours energy storage system (ESS), 143 kilovolt substation and transmission lines. The power plant includes 23 ESS buildings constructed separately as precautionary measures against fires.

Once the solar panel receives light, direct current (DC) is generated. Once the electricity is collected from each circuit's panels, the inverter converts the power to AC and stores the electricity in the ESS section. It can then convert the stored energy back to a 153 kilovolt supply for the Korea Electric Power Corp.'s (KEPCO) system when needed.

"Instead of sending direct current, utilizing the ESS, we can sell the electricity at five times the price and provide it on demand," an LS official said.

The 94 megawatt solar power plant is expected to reduce greenhouse gas emissions by about 56,000 tons ― the effect of planting 310,000 pine trees.

"This large-scale solar power and ESS-related project realized the best quality and performance through the LS Electric smart energy system. It is expected to be a new comprehensive and renewable energy complex," another LS official said. "According to the government's Green New Deal policy and energy transition trend, the mega solar power business is expected to steadily expand both overseas and in Korea."

The President Moon Jae-in administration has stressed the importance of its Green New Deal, attracting attention from renewable energy-related companies such as solar and wind power, as well as businesses in the battery sector.

The government is pushing the Green New Deal as part of its broader goal to go carbon neutral by 2050.

As part of the effort, LS Electric has won large-scale solar power projects in Japan and Bulgaria.

The company is able to provide total solar power system from engineering technology such as photovoltaic modules, inverters, junction panels, and monitoring to maintenance.

"LS Electric is developing a solar power plant, one of the largest in Japan, with Korean technology," Chairman Koo Ja-gyun said.