A new UN Policy Brief shows that hydrogen technologies can contribute to carbon neutrality if the current production of hydrogen will shift from fossil-fuel to fossil fuels with Carbon Capture Use and Storage (CCUS), renewable electricity, nuclear power or grid-connected electricity through electrolysis using low-carbon electricity.

The shift to a decarbonized Hydrogen-based economy that can achieve Carbon Neutrality by 2050 in line with the objectives of the Paris Agreement, requires swift and extensive expansion of renewable and low-carbon hydrogen production. This will require massive investments and appropriate policy support.

The potential of H2 to decarbonize the economy

Hydrogen (H2) is a bulk chemical that is used primarily today in petroleum refining and in the production of ammonia (for fertilisers) and methanol. When used as a fuel, it does not generate direct emissions of pollutants or greenhouse gases.

Because of its potential as a feedstock, energy carrier and storage medium, hydrogen offers the prospect to decarbonize the energy sector and large sectors of the economy, such as transport, industry, power generation and municipal heating. It also opens interesting perspectives in hard-to-abate sectors, such as energy intensive industries or long-haul trans-port, where electrification is only partially possible.

The move to a hydrogen economy would bring annual global demand for hydrogen in 2050 to some 650 Mt, from the current 70 Mt, representing around 14% of the expected world total energy demand. According to the EU Hydrogen Strategy, cumulative investments in renewable hydrogen in Europe by 2050 would need to be in the range from €180-470bn and, for low-carbon hydrogen (fossil-based with CCUS), in the range from €3-18bn.

However, today, about 95% of hydrogen is produced from natural gas or other hydrocarbons resulting in emissions of between 70 – 100 Mt CO2 annually in EU countries alone (the IEA estimates global emissions at 900 million tonnes of CO2).

For hydrogen technologies to contribute to carbon neutrality, the current production of hydrogen needs to shift from fossil-fuel to fossil fuels with CCUS, renewable electricity, nuclear power or grid-connected electricity through electrolysis using low-carbon electricity. But currently, clean hydrogen is 2-3 times more expensive to produce. Public and private investments in clean hydrogen research and development have been growing over the past 4 years to address this issue. However, significant challenges must still be overcome.

“Many countries in the region have launched experiments, adopted hydrogen strategies and mobilized billions of dollars of financing. Many more are expressing interest. The region is well placed to become a major player in the future hydrogen economy. But this will require public and private investment on a massive scale and sustained political commitment,” said UNECE Executive Secretary Olga Algayerova. “UNECE will continue to facilitate policy dialogue on hydrogen and the development of norms and regulations for the safe transport, storage and use of hydrogen, which are needed for the shift to a hydrogen economy.”

State of play in the region

Interest for hydrogen is high on the political agenda across the UNECE region. Various countries, including Austria, France, Germany, the Netherlands, Sweden, and the UK, are among the global leaders in implementing large-scale hydrogen projects. The Brief provides an assessment of countries’ readiness across the region.

The European Union published a wide-ranging Hydrogen Strategy in mid-2020. It aims at delivering 1 million tonnes of renewable hydrogen by 2024 and 10 million tonnes by 2030.

Europe’s mature and regulated network of gas infrastructure (the European transmission grid for natural gas is approximately 200,000 km long and the distribution grid is double that size) is a key enabler for the deployment of a hydrogen economy.

The Policy Brief identifies a series of actions that policymakers and regulators will need to adopt for a hydrogen economy to materialize:

Research and innovation in all clean hydrogen technologies is required to unlock all sustainable production pathways and to move away from fossil-fuel production.

The natural gas transmission network can be used to integrate hydrogen in a cost-efficient way at 10-15% of the cost of a newly built hydrogen pipeline.

Scale up hydrogen projects by 2030

By 2030, investments in electrolysers in Europe could range between €24-42bn and around €11bn in retrofitting half of the existing coal and gas-powered plants with CCUS. Investments of €65bn will be needed for hydrogen transport, distribution and storage and hydrogen refuelling stations, manufacturing, and intellectual property.

Storage and transport of H2

To be transportable hydrogen needs to be compressed, liquefied, or chemically combined. Hydrogen can be blended with natural gas and transmitted via the existing gas infrastructure. Studies indicate that natural gas burning boilers and pipelines can safely operate with up to 5-15% of hydrogen content. According to the US Department of Energy, pipelines can handle from 15% to 30% hydrogen blends without modifications.

The Brief identifies repurposing and retrofitting the existing gas infrastructure as the most cost-effective solution to transport H2 up to 5,000km. Beyond this distance, converting hydrogen to more easily stored and transported energy vectors, such as ammonia, methanol and synfuels would be cheaper. This would also make it possible in the longer term to decouple the centres of production and use of H2.

In addition, storing millions of tonnes of hydrogen to meet anticipated demand by 2050 is still a challenge. Ambitious policies and investments are needed today to support hydrogen storage, transport and conversion infrastructure that is required for a future hydrogen market to function. This can be optimised by regional approaches to a hydrogen grid. 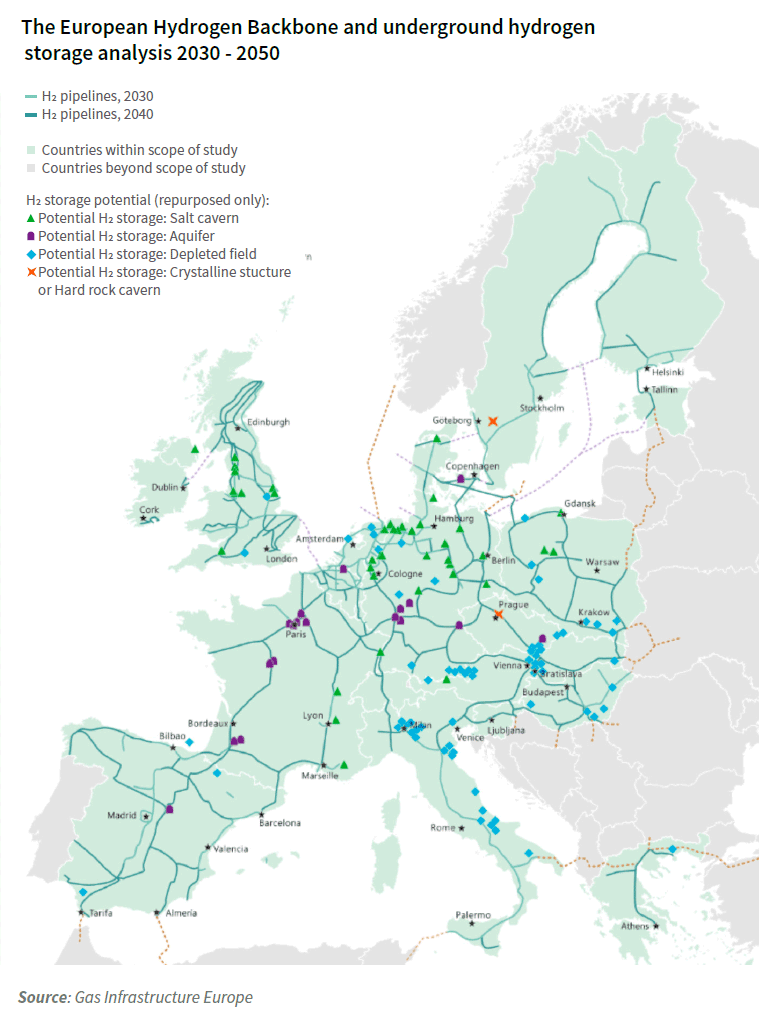 Current estimations of hydrogen costs ‘at the pump’ are between €7-9/kg. By 2030, hydrogen costs are expected to be less than €6/kg and competitive with fossil fuels.

International regulations developed by UNECE’s World Forum for Harmonization of Vehicle Regulations provide the basis to scale up the use of HFCVs. The UN Global Technical Regulation (UN GTR) No. 13, under the 1998 Agreement and UN Regulation No. 134 (mirroring the same provisions in the framework of the type approval system), under the 1958 Agreement, specify safety-related performance requirements for HFCVs, aiming at protecting occupants from fire or explosion of the hydrogen on-board containers. They also include requirements to prevent electric shocks to occupants or first responders in case of a crash. The high-voltage safety provisions for HFCVs were used in UN GTRs and UN Regulations that the World Forum adopted to encompass all types of electric vehicles (irrespective of the technology used to generate power).

Hydrogen is not toxic; however, it is extremely flammable, can easily ignite and detonate, tends to escape (due to its small size) and it is highly reactive. Many accidents involving hydrogen are therefore fires and/or explosions.

Hydrogen is covered as a hazardous substance under the provisions of the UNECE Convention on the Transboundary Effects of Industrial Accidents, which supports countries to strengthen prevention, preparedness, and response in the case of an accident. A Joint Expert Group under the Convention and the Water Convention has developed Safety Guidelines and Good Practices for Pipelines.

Romania is keen to commence several pilot projects in electricity and industrial sectors, according to government plans. Facilitating legislative changes while working with EU partners could accelerate change; Readiness Level: 3.