17 Nov 2021  by World Nuclear News
EDF Energy hailed the "replication effect" of series nuclear build as it completed a major lift at Hinkley Point C. Placing the first ring of unit 2's reactor building was done 25% faster than the same procedure for unit 1, the company said. 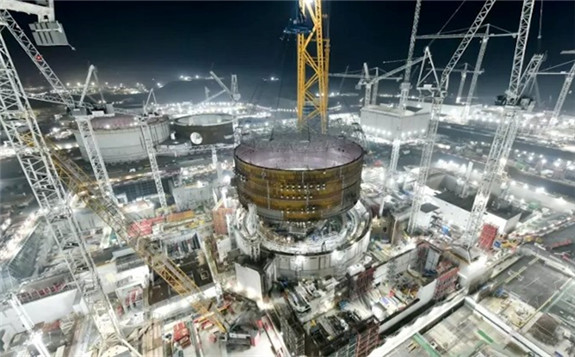 "Building an identical copy of the first reactor drives efficiency and saves time," said EDF Energy, announcing the milestone. The ring has a diameter of 47 metres, is 17 metres high, and its 575-tonne bulk was moved by a large crawler crane known on site as Big Carl. Two more rings and then a cap will be needed to form the building.

Hinkley Point C started construction in December 2018 and should generate its first power in 2026.

"The ring was built 25% more quickly than the same part on unit 1, requiring thousands of hours less labour to manufacture," said the company, adding, "This 'replication effect' will benefit the identical Sizewell C project in Suffolk."

Hinkley Point C is composed of two EPR reactors of 1630 MWe each and Sizewell C is proposed to be an exact copy from the ground up, EDF Energy has said. It will also re-use as much equipment and re-employ as much of the workforce as possible from Hinkley Point C.

Sizewell C has planning permission and awaits a final approval from the UK government, but EDF Energy also needs to assemble its project finance. The UK government introduced legislation last month to enable the Regulated Asset Base model to facilitate this. It would see the project funded by a small increment on consumer electricity bills, rather than by commercial lending. Over the life of the plant this would save UK consumers GBP30 billion (USD40 billion) compared with the financing for Hinkley Point C, which is based on a model of contracts for difference, the government claimed.