13 Nov 2021  by World Nuclear News
Hot functional testing of Karachi 3 in Pakistan was completed ahead of schedule on 4 November, China National Nuclear Corporation (CNNC) announced today. This means the second overseas Hualong One unit has entered the "fuel loading stage", the company said. 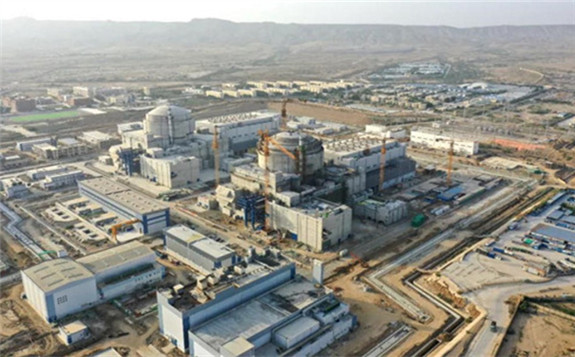 Hot functional tests simulate the temperatures and pressures that the reactor systems will be subjected to during normal operation and are carried out before loading nuclear fuel. They involve increasing the temperature of the reactor coolant system and carrying out comprehensive tests to ensure that coolant circuits and safety systems are operating as they should. China Zhongyuan Engineering Corporation - CNNC's general contractor for Karachi 2 and 3 - previously announced that the tests at Karachi 3 began on 13 September.

Like Karachi 2, which entered commercial operation in May, Karachi 3 is a 1100 MW Hualong One unit supplied by CNNC. The two units are the first exports of the Hualong One, which is also promoted on the international market as HPR1000. The first example of the Hualong One - Fuqing 5 in China's Fujian province - was commissioned at the beginning of this year. Eight nuclear power units using Hualong One technology are under construction or in operation at home and abroad, CNNC said.

The construction of the Karachi units has boosted the development of Pakistan's economy by providing over 10,000 direct jobs for Pakistan citizens, and a further 40,000 indirect jobs through the value chain, it added.