Completion of Khmelnitsky 3 'Begins' in Ukraine

10 Nov 2021  by World Nuclear News
Work has already started to complete Ukraine's Khmelnitsky 3 using AP1000 technology. Engineers from Westinghouse are at the site, taking stock and considering how to complete the unique project, according to plant owner Energoatom. 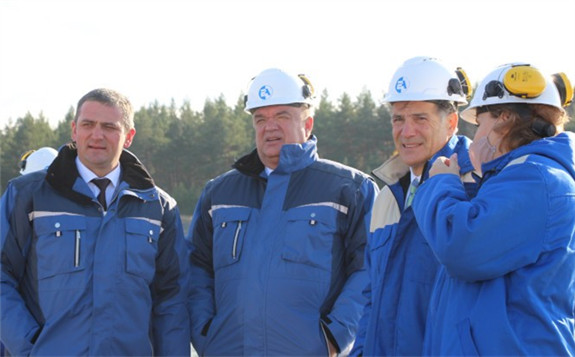 "The purpose of the visit is a detailed inspection of the third power unit of the station to determine the possibilities and measures for its further completion," said Energoatom. The engineering mission was headed by Westinghouse's First Vice President of Commercial Activities Elias Gideon and vice president of the company for construction of new nuclear power plant Joel Iker.

"We have done a lot of work to prepare the documentation, now two teams of our engineers from the US and Europe have arrived, who will work hard with Energoatom next week, explore the site and exchange the necessary information," said Gideon.

Westinghouse inspected the site on 7 November and will "conduct a gap analysis" that leads to suggestions on ways to successfully implement the construction.

Khmelnitsky 3 was originally intended to be a VVER-1000 but construction stalled in 1990 at around 75% completion. The foundation and much of the containment structure are present, as is some heavy equipment in storage on site. At the same time, Energoatom and Westinghouse have an opportunity to use AP1000 components and modules intended for the cancelled Summer project in the USA and kept in storage there.

On 8 November, a meeting between the two companies heard their preliminary conclusions and assessment of the site. "Today we begin practical work on the construction of new nuclear facilities," said Energoatom head Petro Kotin.

Ukraine has wanted to complete Khmelnitsky units 3 and 4 for many years. Kotin noted that procedures under the Espoo Convention have already been completed, there has been a positive conclusion by the Ministry of Environment, and "a bill on completion of Khmelnitsky 3 and 4 has been submitted to the government, and we expect its approval and submission to the Verkhovna Rada (parliament) of Ukraine in the near future."

Gideon said, "In parallel, we are working with financial institutions to finance the project, in particular with the US EXIM Bank. We hope to sign a number of agreements in the near future."