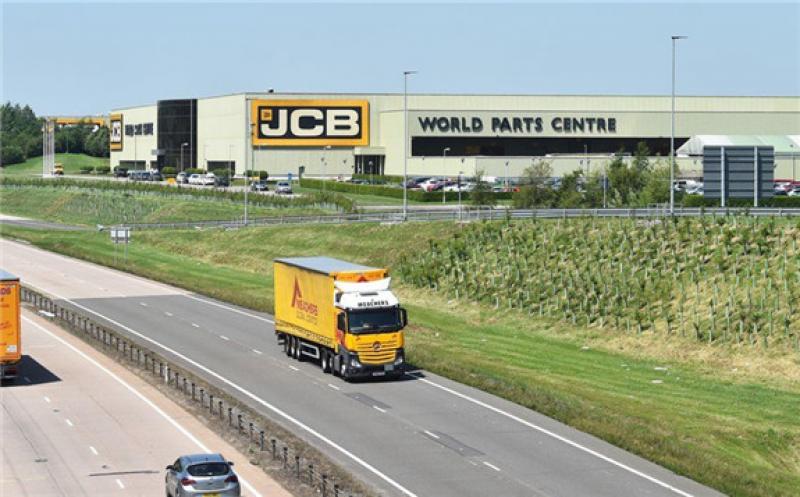 The deal means JCB will take 10% of the green hydrogen made by the Australian firm Fortescue Future Industries (FFI).

FFI said the deal was a "first-of-a-kind partnership" that would see it become the UK's largest supplier of the clean fuel.

Production, mostly done outside the UK, is expected to begin early next year.

JCB and a firm called Ryze Hydrogen would then distribute it in the UK.

Lord Anthony Bamford, chairman of JCB, said the deal would help to make green hydrogen a viable solution, telling the BBC it was "the right thing to do".

Hydrogen does not produce carbon emissions when it is burned, so is considered a likely replacement for fossil fuels in heavy industries such as shipping and steel and cement-making.

Lord Bamford has also called on the government to invest in hydrogen-fuelled forms of transport such as buses, trains and aircraft.

In a statement, he said: "It's fine having an engine powered by green hydrogen, but no good if customers can't get green hydrogen to fuel their machines.

"This is a major advance on the road towards making green hydrogen a viable solution."

Business Secretary Kwasi Kwarteng has said low carbon hydrogen has a critical role to play in the UK's transition to net zero - that is balancing the amount of greenhouse gas produced and the amount removed from the atmosphere.

In the government's UK Hydrogen Strategy, the business secretary argues the UK's "infrastructure and technical know-how make us ideally positioned to be a global leader in hydrogen".

However, he has previously admitted its production, and use, would have to rapidly increase for the government's ambitions to be achieved.

Robert Buckley, an energy analyst at Cornwall Insights, said: "Hydrogen has the potential to be a very important energy source for heavy transport and industry."

But he pointed out that Australia, where the hydrogen for the JCB deal will largely be produced, has more solar electricity resources than the UK, as well as an established gas export industry.

He said that could give other countries, such as Australia, "an early advantage" while hydrogen production in the UK became more established.

Ministers think low carbon hydrogen has a critical role to play in the transition to net zero.

The goal is 5 gigawatts of production capacity by 2030. However, the Business Secretary admits production and usage would have to be ramped up fast for that to be met.

And when the government's UK Hydrogen Strategy was published in August, the trade association RenewableUK said it didn't focus enough on developing the UK's green hydrogen industry - meaning production that uses renewable energy, not natural gas.

One energy analyst said that such deals could mean that the technology becomes commercial quicker, and firms themselves take it up more quickly. That's clearly the hope for two hydrogen-enthusiastic businessmen.

JCB, based in Uttoxeter, Staffordshire, also announced earlier this month that it was spending £100m on a project to produce "super efficient hydrogen engines" to power its machinery.

This latest deal ties in billionaire Lord Bamford and JCB with FFI, which is the newer renewables subsidiary of mining giant Fortescue Metals Group, owned by Andrew Forrest.

Mr Bamford is also the chairman and owner of Wrightbus, which built the UK's first hydrogen double decker.