Pressure Vessel in Place at Zhangzhou 1

The reactor pressure vessel (RPV) has been hoisted into place at unit 1 of the Zhangzhou nuclear power plant in China's Fujian province. Zhangzhou unit 1, the first of two Hualong One units at the site, is scheduled to enter commercial operation in 2024. 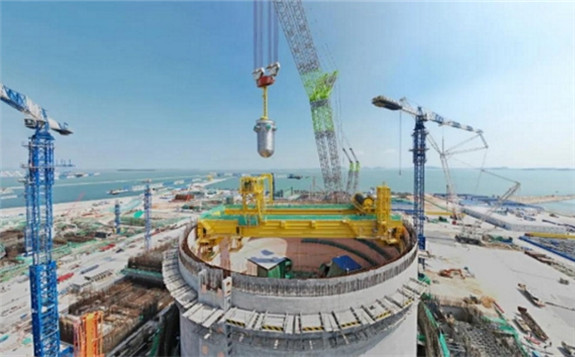 The RPV - weighing 316 tonnes - was designed by China National Nuclear Corporation's (CNNC's) Nuclear Power Research & Design Institute. A contract was signed with China First Heavy Machinery Company Limited (CFHI) in 2016 for the manufacture of the RPV for Zhangzhou unit 1. The component passed the factory acceptance inspection in July this year.

The vessel was hoisted into place yesterday in an operation lasting nine hours, CNNC announced today.

The main nuclear island equipment - including the RPV and steam generators - are now in place at Zhangzhou 1, "a prerequisite for the subsequent dome hoisting and main pipeline welding," CNNC said. It noted the inner dome of the unit's containment building is scheduled to be hoisted at the end of this month.

China's Ministry of Ecology and Environment issued construction licences for Zhangzhou units 1 and 2 on 9 October 2019 to CNNC-Guodian Zhangzhou Energy Company, the owner of the Zhangzhou nuclear power project which was created by CNNC (51%) and China Guodian Corporation (49%) in 2011. The licences are valid for 10 years. Construction of unit 1 began one week after the issuance of a construction licence, with that of unit 2 starting in September 2020. The units are scheduled to enter commercial operation in 2024 and 2025, respectively.

CNNC began construction of two demonstration Hualong One units at its Fuqing plant in Fujian province in May and December 2015, respectively. The first of these, Fuqing 5, was connected to the grid on 27 November last year, having achieved first criticality on 21 October, and entered commercial operation on 30 January this year. Fuqing 6 is expected to begin operating by the end of 2021.

Construction of two demonstration Hualong One (HPR1000) units is also under way at China General Nuclear's Fangchenggang plant in the Guangxi Autonomous Region. Those units are expected to start up in 2022. CNNC has also started construction of the first of two Hualong One units at Taipingling in Guangdong.