On October 10, 2021 Director General of Rosatom State Corporation Alexey Likhachev arrived in Bangladesh with a working visit. The visit of the Head of the company was timed to the completion of the installation of the reactor pressure vessel at Rooppur NPP Unit 1 which was performed from September 14 to October 10, 2021. 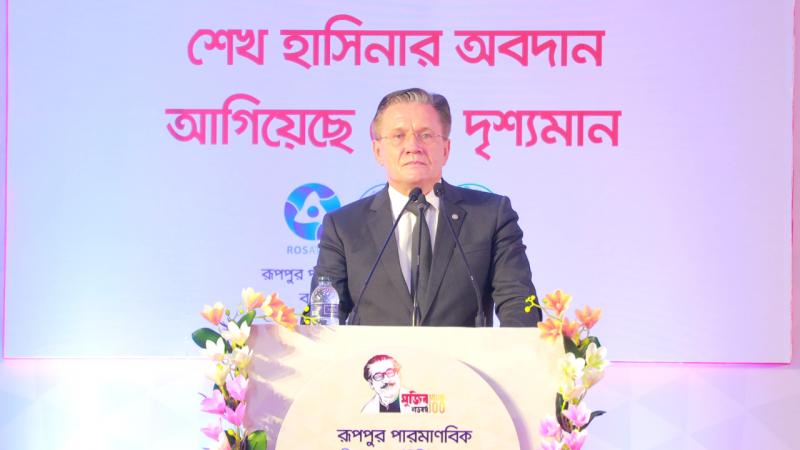 Director General of Rosatom State Corporation and H.E. Sheikh Hasina Wazed, Honorable Prime Minister of the People’s Republic of Bangladesh, launched the final stage of the installation of the reactor pressure vessel at Rooppur NPP construction site in Ishwardi district. The installation of the reactor pressure vessel started on 14 September 2021. In the course of this operation during the next two weeks, the reactor was moved via the transportation lock inside the reactor building containment. After that the 334-ton structure was installed into the design position with a polar crane with a tolerance of one tenth of millimeter.

Alexey Likhachev emphasized the significance of the completed reactor pressure vessel installation and underlined that the well-coordinated work of the specialists of Rosatom and their colleagues from Bangladesh was bringing the country closer to its goal of nuclear power industry development. “Today Rooppur NPP has witnessed the important milestone of the year of 2021 - the reactor pressure vessel of Unit No 1 has been installed in the design position. The high qualification of the specialists and the thorough preparation ensured the performance of the works with a pinpoint precision. Rooppur NPP project that is being implemented in Bangladesh has accumulated the best Russian practice and dozens of years of experience and scientific thought. The unique combination of active and passive systems of the power units will ensure safe operation of the power plant and guarantee the declared level of electricity generation. The development of nuclear power industry will not only resolve the problem of energy supply in Bangladesh but will also contribute to the development of the region and enhance the living standards of the people. Cooperation

between Russia and Bangladesh is of strategic character. I am confident that many more other mutual projects both in the field of power engineering and other areas are yet to be implemented by Russian and Bangladeshi specialists”, pointed out Alexey Likhachev.

In her speech Prime Minister said," Today is a day of joy and pride for us as the reactor pressure vessel is being set up at unit-1 of Rooppur Nuclear Plant. And by this we confirm our strong presence in the nuclear world so far as peaceful use of nuclear technology is concerned."

"After being convinced about safety and management of nuclear waste at the meeting with President Putin in 2013, i decided to go for nuclear," she added.

Sheikh Hasina thanked Russia for extending their support in implementing the Rooppur project.

"Earning of knowledge about the most modern technology like nuclear by our young generation will help them acquire special qualification and skill," Sheikh Hasina opined.

"As this technology doesn't have carbon emission, hence it is eco-friendly and will help fight against adverse effect of climate change. This power station will help us achieve SDG goals by 2030 in line with our development plan and facilitate graduation to a developed nation in 2041," she further added.

After the successful completion of the reactor pressure vessel installation, Rosatom General Director and Honorable Prime Minister of Bangladesh continued discussion in the course of a closed meeting where the issues of strategic cooperation between Rosatom State Corporation and Bangladesh were raised.