Yongbyon Nuclear Reactor Appears to be in Operation: IAEA Report

The U.N. nuclear watchdog has detected "deeply troubling" indications that a key nuclear reactor at North Korea's main Yongbyon complex has been in operation since July, including the release of cooling water, an annual report showed Monday. 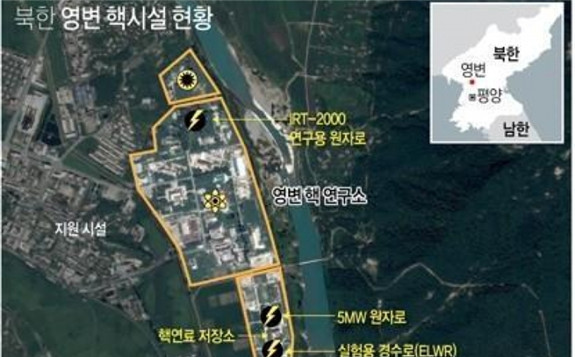 Submitted to the International Atomic Energy Agency's Board of Governors on Friday, the report covered new developments of the five megawatt reactor, from which the North obtained spent fuel rods to extract plutonium -- a fissile material used for a bomb -- in the past.

The report based on satellite imagery and other sources came as Seoul and Washington push to resume dialogue with the North, following its furious reactions to the allies' recently concluded annual military exercises.

"Since early July 2021, there have been indications, including the discharge of cooling water, consistent with the operation of the reactor," the report reads, noting there were no indications of such a reactor operation from early December 2018 to the start of July this year.

The report also said that the steam plant, which serves the radiochemical laboratory at the Yongbyon complex, operated for approximately five months, from mid-February 2021 until early July 2021. The plant is used to provide heat to a fuel rod reprocessing facility

"The duration of the operation of the steam plant and Radiochemical Laboratory in 2021 is significantly longer than that observed in the past during possible waste treatment or maintenance activities," the report said.

"The five-month timeframe is consistent with the time required to reprocess a complete core of irradiated fuel from the 5MW(e) reactor," it added.

The report stressed that the North's nuclear activities remain a "cause for serious concern."

"Furthermore, the new indications of the operation of the 5MW(e) reactor and the Radiochemical Laboratory are deeply troubling," the report said.

"The continuation of the DPRK's nuclear programme is a clear violation of relevant UN Security Council resolutions and is deeply regrettable," it added, referring to the North's official name, the Democratic People's Republic of Korea.