Siemens Energy has secured €100m of funding for a project which aims to link offshore wind turbines with electrolyzers to directly convert electricity into hydrogen. 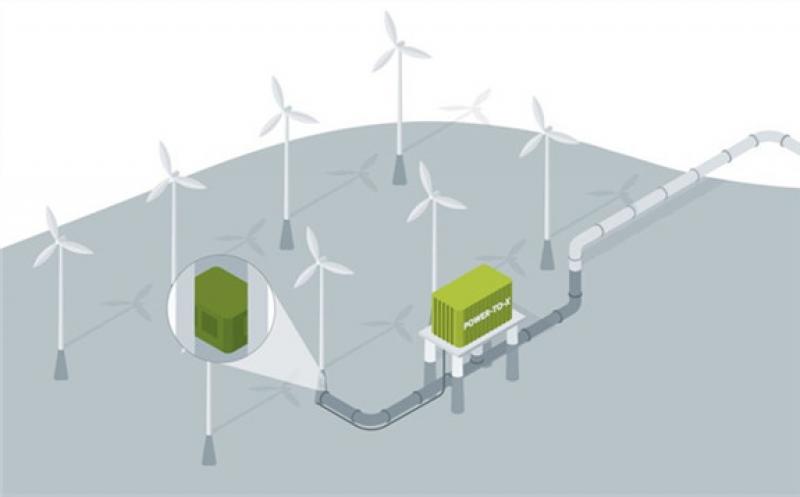 The H2Mare project aims to establish a whole new type of turbine at sea in the future – a solution which integrates an electrolyzer into an offshore wind turbine optimally for direct conversion of the electricity.

In addition, the project will also investigate further offshore power-to-X processes, aided by the funding from the German Federal Ministry of Education and Research (BMBF).

Siemens Energy is responsible for the coordination of H2Mare and is supported by the Fraunhofer Institute for Wind Energy Systems.

The offshore wind turbines of the future are set to produce molecules instead of electrons, according to the Institute.

Self-sufficient units comprising a wind turbine and an integrated electrolyzer produce green hydrogen on an industrial scale and save the costs of connection to the grid.

In this way, they can make a significant contribution to the reduction of greenhouse gas emissions.

In a second phase, the green hydrogen can be converted into further synthetic fuels and energy carriers.

This will involve consideration of the entire value creation chain: from wind energy generation and hydrogen production to the conversion of hydrogen into methane, liquid hydrocarbons, methanol, or ammonia right up to use in industry or the energy sector.

As such, various industrial downstream uses and storage options are possible.

The goal is a significant cost advantage in the production of large volumes of hydrogen.

Within four years, H2Mare – comprising four joint projects with a total of 35 partners including Siemens Energy – aims to lay the foundations for technology leadership and support the achievement of climate targets by reducing greenhouse gas emissions more rapidly.

Siemens Energy chief executive Christian Bruch said: "Together with our partners, we want to establish the production of green hydrogen offshore with H2Mare.

"We are bringing in our offshore wind and electrification capabilities as well as our expertise in electrolysis.

"H2Mare unites the strengths of research and industry – for sustainable decarbonization of the economy and to the benefit of the environment.

"We need the support of politics to drive forward innovative solutions for a green hydrogen economy.”

The four H2Mare projects are being promoted independently of each other:

OffgridWind: Pursues the implementation of a turbine concept that realizes electrolysis directly in the offshore wind turbine, thereby aiming for a high degree of efficiency.

H2Wind: Consists in the development of a PEM (proton exchange membrane) electrolysis system optimally adapted to the offshore environment and tuned to the wind turbine. In addition to the durability of the turbines and the challenge of processing seawater, the maximum yield of wind energy is one of the project’s goals.

PtX-Wind: In contrast to pure offshore hydrogen production, the focus here is on conversion to more easily transportable, synthetic energy carriers and fuels, such as methane, methanol, and ammonia. The power-to-X products are produced via high-temperature electrolysis and CO2 extraction from the air or sea. Direct saltwater electrolysis is also being tested.

TransferWind: TransferWind addresses the transfer of knowledge to the public as well as the exchange of expertise across projects. At the same time, it also considers safety and environmental issues as well as infrastructure requirements.

One important aspect of the investigations is the integration of individual processes into complete systems: for example, the efficiency of the overall process can be increased by the heat integration of high-temperature electrolysis in PtX processes.

This also includes the concepts for storing and transporting the hydrogen and other power-to-X products back to land by ship and pipeline.

The project explores, evaluates, and further develops the interactions between the different processes and the turbine as well as their impact on the surrounding environment at the site over the wind turbine’s entire life cycle.

One challenge at a material level is the use of existing technology in an offshore environment for the first time and the research and development of new materials and components for offshore use.

The development of digital twins for the different system components and the technical and economic analyses based on them also forms part of all four H2Mare projects.

H2Mare is one of three flagship projects being conducted by the German Federal Ministry of Education and Research, which issupporting Germany’s entry into the hydrogen economy with its largest initiative regarding the energy transition to date.

The three hydrogen flagship projects H2Giga, H2Mare, and TransHyDE are the result of an ideas competition and represent a central contribution on the part of the BMBF to the implementation of the National Hydrogen Strategy.

They are intended to remove existing hurdles impeding Germany’s entry into a hydrogen economy over the next four years.

The goals of the projects are the serial production of large-scale water electrolyzers (H2Giga), the production of hydrogen and downstream products at sea (H2Mare), and the development of technologies for the transport of hydrogen (TransHyDE).

More than 240 partners from science and industry are working together on the three hydrogen flagship projects, which were launched on the basis of non-binding funding promises in the spring.

Fraunhofer IWES participates as project partner in OffgridWind, H2Wind and as associated partner in TransferWind.