Hyosung Group and Linde plc have finalized a division of roles in jointly promoting their hydrogen project. 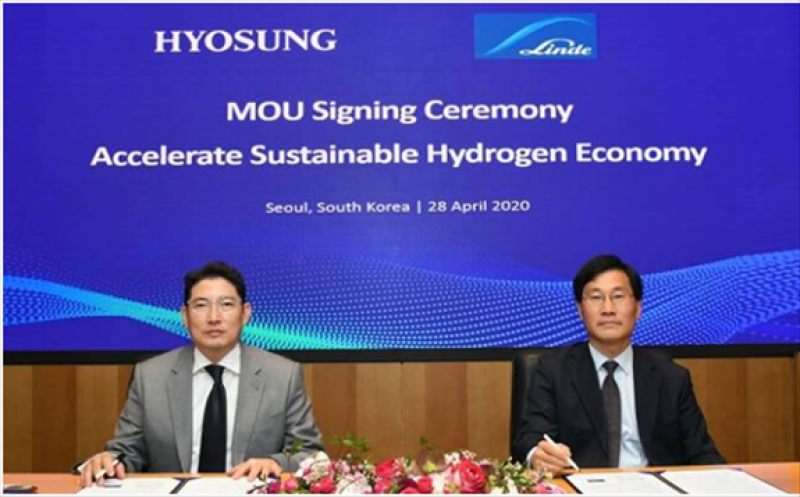 Linde, a global multinational chemical company, will be in charge of producing liquefied hydrogen, while Hyosung will focus on selling the product.

Hyosung Group has reportedly invested 10.73 billion won for a 49 percent stake in Linde Hydrogen Energy, a joint venture set up for production of liquefied hydrogen. The remaining 51 percent is held by its partner.

Linde Hydrogen Energy will build a 13,000-ton-a-year liquefied hydrogen plant on the premise of a Hyosung Chemical plant. The plant is currently under construction after a groundbreaking ceremony. Hyosung and Linde are reportedly planning to start construction of the plant at the end of the year and start the plant’s commercial operation in May 2023.

Hydrogen is liquefied at minus 253 degrees Celsius. Linde has cryo pump technology, the core technology for hydrogen liquefaction. This technology has helped to make Linde the world's No. 1 player in the hydrogen charging business.

Hyosung Group has chosen Linde as its business partner to share its advanced hydrogen liquefaction technology. This is why it has agreed to own a minority stake in the hydrogen liquefaction joint venture. It plans to invest one trillion won over the next five years to expand its liquefied hydrogen production capacity to 39,000 tons a year.

The two companies have also established another joint venture, Hyosung Hydrogen, for distribution of liquefied hydrogen. In this company, Hyosung owns a 51 percent stake, while Linde holds the remaining 49 percent. However, the specific amounts of investment that the two companies will make have not been determined yet.