The Dukovany nuclear power plant in the Czech Republic has opened its annual drive-in cinema in the shadow of the plant's cooling towers. Every Saturday through the month of August, moviegoers will enjoy local films with their entry fee going to charity. 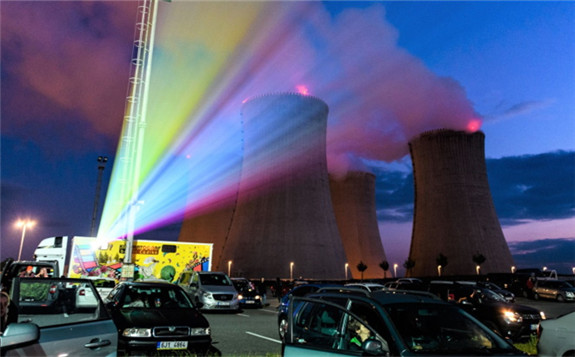 Every year the owner and operator of the plant, CEZ, erects a large projector screen in the car park of the power plant. Moviegoers can watch from their car, or using their own garden chairs, while audio is provided by radio.

The screenings are provided in collaboration with Čadík Brothers Cinema, which has shown films in over 80 towns and villages across the Czech Republic and Slovakia which do not have their own cinemas. A programme of mostly domestic films is being shown, with each show ending with a Czech fairy tale.

Proceeds from the voluntary entrance fee at Dukovany are being donated to organisations supporting people in the Hodonín region affected by a powerful tornado which struck in June. Before the movie visitors also have the chance to visit Dukovany's vineyards, which are adjacent to the cooling towers, CEZ noted.

At the same time, Dukovany staff have been welcoming hundreds of people to tour the plant on Firdays. In addition to its visitor centre, CEZ has put on attractions for families with children including electric car rides and a 3D plant tour. People wanting a more detailed look at a nuclear power plant can take part in tours of secure areas, such as the used fuel store.

CEZ said that on 31 July some 729 visitors came to Dukovany with "almost 300" going through security for close-up plant tours.

"The visitors were great, they showed great interest and joy that they can visit the power plant live," said Dana Janovská, information centre guide.