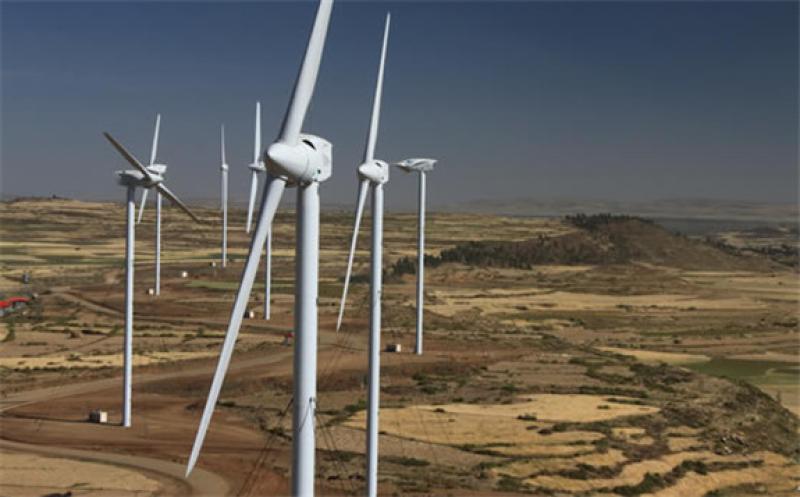 That conviction has been driving hundreds of engineers and construction workers from China and Ethiopia over the past three years in their mission to build a wind power park in the vast desert of the Somalia Region in eastern Ethiopia. If everything goes well, a green-energy power plant will emerge on the barren landscape by the end of the next year.

The Aysha wind power project, under the China-proposed Belt and Road Initiative, broke ground in May 2018 and was contracted by Dongfang Electric International Corporation, a Chengdu-based enterprise specializing in the production of power-generating equipment.

With a projected total installed capacity of 120 megawatts and an energy output of 467 gigawatt hours per year, the $257 million project is expected to boost the national energy output of Ethiopia, meeting the rising demand for local power grid construction and upgrading.

The renewable energy project, part of Ethiopia’s Growth and Transformation Plan II, will boost the country’s electricity generation capacity, alleviating the electricity shortages experienced in the surrounding areas and Djibouti, said Zhang Xiabo, the manager of the project.

Located at the juncture of Ethiopia, Djibouti and Somalia, the wind farm will also provide electricity for industrial parks along the Ethiopia-Djibouti Economic Corridor and for the Addis Ababa-Djibouti Railway once it is up and running and integrated into Ethiopia’s power grid, Zhang said. Ethiopia has also exported electricity to its neighbors Kenya and Sudan, as well as Djibouti.

“The wind power plant provides renewable energy, so it’s nice for the country and the government … for this area and the society here,” said Tessema.

“Because they don’t have any power plants in this region, it benefits locals a lot. It has an economic impact to sell electricity to neighboring countries.”

Ethiopia has invested heavily in renewable projects as part of its green-economy strategy under the government’s hopes to partially achieve its goal of net-zero carbon emissions by 2025, with investments in clean, renewable energy like wind, hydro and geothermal.

For locals, what the project brings is not just a means of addressing the power shortages; more than 300 of them have been working at the wind farm site, enjoying higher salaries than they would typically find in the area.

Most of the local employees have been directly involved in construction, while some have taken on the responsibility of supervision and management as senior managers and technicians.

With training and on-site working experience, local construction workers have been able to expand their technical capabilities and hone their skills, said Zhang, adding that the project has cultivated many local talents.

It hasn’t been all plain sailing. When the COVID-19 pandemic brought the world to a halt in early 2020, construction work at the site was also interrupted.

In late March last year, the company was delivering a set of equipment including a wind turbine, a generator and a tower from Djibouti Port to the site in Ethiopia. But at that time Ethiopia had just shut down its border to keep out the virus, which left four Chinese technicians stranded in Ethiopia.

The company sent technicians from its headquarters in China to enable the work required to transport the equipment. That action prevented the construction work from grinding to a halt.

The project is 75 percent completed, and is expected to be completed by the end of 2022.