The dome of the inner containment shell of unit 1 of the Rooppur nuclear power plant in Bangladesh is now being installed, Rosatom announced yesterday. The metal structure has a diameter of 44 metres and a weight of 185 tonnes. The operation is being carried out by Trust RosSEM, using a Liebherr heavy crawler crane that has a lifting capacity of 1350 tonnes. The day before lifting, a special mounting traverse of 15 steel cables was installed. 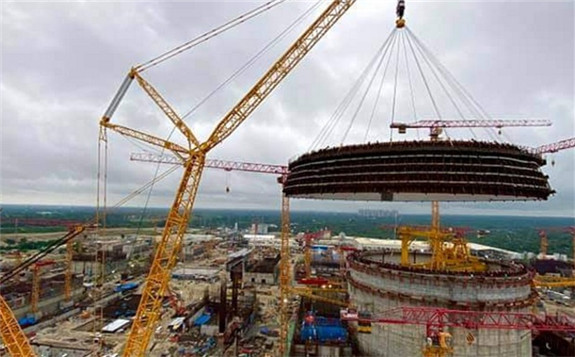 The first of the three tiers of the dome part of the inner containment shell has been installed, said Alexey Deriy, vice president and project director for the construction of the Rooppur plant at Russia's ASE JSC. As soon as the next two tiers have been welded together, work will start to concrete the dome, he added.

The site of the Rooppur nuclear power plant is located on the east bank of the River Ganges, in the Pabna district, about 160 km northwest of the capital Dhaka. The plant will consist of two VVER-1200 reactors, the life cycle of which is 60 years with the possibility of extension by another 20 years.

The first VVER-1200 reactor to enter operation, at Novovoronezh II in Russia, is the reference plant for what will be Bangladesh's first nuclear power plant.