The first steam generator has been removed from Bruce unit 6, marking a significant milestone in the Major Component Replacement (MCR) project. The unit is the first of six which are to be refurbished as part of a programme to secure the operation of the eight-unit site in Ontario until 2064. 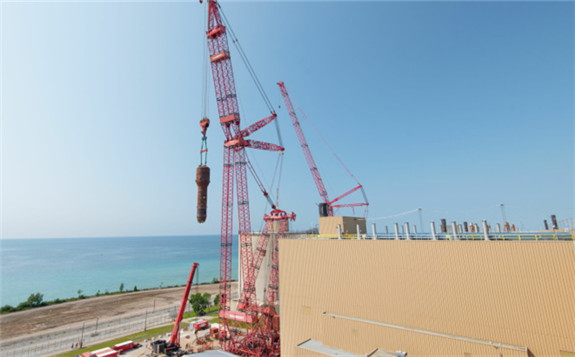 Unit 6 contains eight steam generators, arranged vertically in two columns of four on the east and west side of the reactor. Each steam generator weighs about 320,000 pounds (145 tonnes). The steam generators was lifted through a port in the roof of the reactor building using a the 1600-tonne capacity Mammoet PTC-35 crane, one of the largest in the world. New steam generators, fabricated at BWXT in Cambridge, Ontario and shipped to the Bruce site late last year, will then be lifted into place.

"The steam generator replacement is a major milestone for the Unit 6 MCR, and represents years of hard work and collaboration between Bruce Power and our partners like SGRT, BWXT, Mammoet, Nuvia, and the Building Trades Unions," Bruce Power President and CEO Mike Rencheck said. The removal of the steam generator was done by Steam Generator Replacement Team (SGRT), a 50/50 joint venture between Aecon and SGT, a partnership of Framatome and United Engineers & Constructors.

"This first lift was preceded by a half a decade of preparations and was completed successfully thanks to our safe work plan, highly skilled construction trades as well as strong collaboration and communication with our vendor partner, SGRT," Bruce Power Executive Vice President, Projects & Engineering Eric Chassard said. "The team is now focused on the safe execution of the 15 remaining lifts, which will be finished next month."

The MCR project includes the replacement of key reactor components such as steam generators, pressure tubes, calandria tubes and feeder tubes, and is part of Bruce Power's Life-Extension Program, which started in January 2016. The life extension work will add about 30 to 35 years of operational life to each reactor, while other investments will add a combined 30 reactor years of operational life to the units.

After the steam generators have been replaced, the MCR will move on to so-called vault work, which will involve the removal and replacement of the pressure tubes, calandria tubes, as well as the lower and upper feeders. In all, 460 feeder tubes, 480 fuel channels, and 480 calandria tubes will be removed and replaced in a phase described by Bruce Power as the heart of the project. Work to remove the internal reactor components of unit 6 was completed earlier this month.