Rosatom and a subsidiary of Kaz Minerals have signed for power supply to the new Baimskaya copper mining project in the Chukotka region of eastern Siberia. Rosatom proposes to use three floating nuclear power plants each employing a pair of the new 55 MWe RITM-200M reactors, a version of which is in service powering icebreakers. A fourth unit would be held in reserve for use during repair or refuelling. The first reactors are already under construction by Atomenergomash. The companies said that they would conclude a long-term take-or-pay contract for the electricity by April 2022. 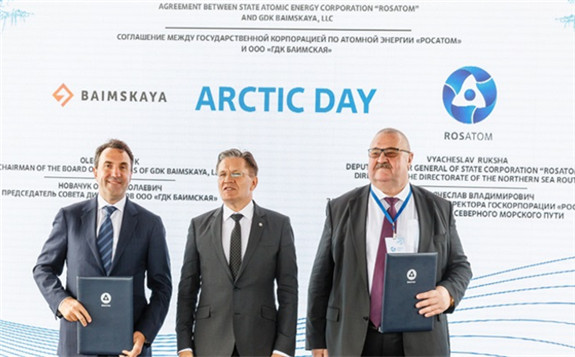 The mine is expected in operation about 2027, contingent on the regional government agreeing to share infrastructure development costs, in particular to finance and construct the power lines. The overall project is expected to cost USD8 billion. In the first few years it is expected to produce 320,000 t/yr copper as well as gold and other minerals providing one-third of revenue.

The first two nuclear vessels are expected to be delivered to their working location at the project’s port, Cape Nagloynyn, Chaunskaya Bay and connected to 110 kV power lines leading via Bilibino to the Baimskaya mine over 400 km away at the end of 2026. The third unit is due to be connected at the end of 2027, increasing power supply to about 330 MWe.

Russia’s first floating nuclear power plant is in service at Pevek, using two older model 35 MWe reactors. It with Bilibino is supplying 20 MWe to the Baimskaya project during construction phase until 2027. The old nuclear capacity of 33 MWe at Bilibino is due to be retired by then.

Rosatom announced on 23 July the signing of the agreement with GDK Baimskaya LLC to supply power to the Baimsky mining and processing plant (GOK). The agreement was signed by Vyacheslav Ruksha, Rosatom deputy director general and director of the Northern Sea Route Directorate, and Oleg Novachuk, GDK Baimskaya LLC's chairman. The signing ceremony took place as part of the Arctic Day event organised by Rosatom.