Tests have been completed to evaluate the strength and leak tightness of the inner containment of unit 6 at the Fuqing nuclear power plant in China's Fujian province. The unit - the second of two demonstration Hualong One reactors at the site - is scheduled to begin operations by the end of this year. 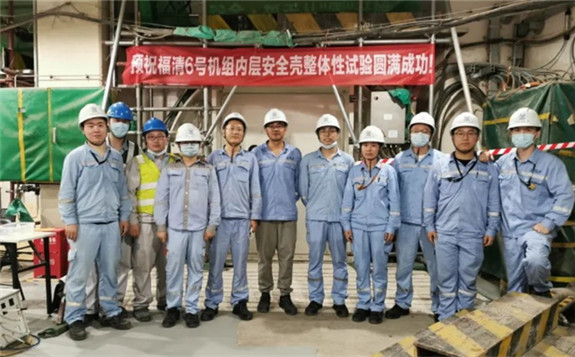 The structural integrity test and the integrated leak rate test, which together demonstrate the integrity and robustness of the structure and its ability to perform under normal and extraordinary circumstances, began on 11 July and were completed yesterday, China Nuclear Power Engineering Company (CNPE) has announced. CNPE the China National Nuclear Corporation (CNNC) subsidiary responsible for the construction, equipment procurement, trial testing and operational maintenance of nuclear power plants.

The structural integrity test evaluates the strength of the reactor containment building by pressurising and depressurising it to simulate a variety of conditions, while the leak rate test evaluates its leak tightness under different conditions. The test results show the building, which houses the reactor and major components, can perform its primary function of containing radiation under normal operating conditions as well as in emergencies or other extraordinary events.

During the tests, which involved raising and reducing the pressure inside the containment in 14 stages, a total of 16 commissioning tests were completed, CNPE said.

"Through the verification of the commissioning test at each stage, the structural strength and overall sealing performance of the inner containment all meet the design requirements, laying a solid foundation for the subsequent loading of fuel into Fuqing nuclear power plant unit 6," it said.

The pouring of first concrete for Fuqing 5 began in May 2015, marking the official start of construction of the unit. Construction of unit 6 began in December the same year. Unit 5 was connected to the grid on 27 November last year, having achieved first criticality on 21 October, and entered commercial operation on 30 January this year.

Cold functional testing was completed at Fuqing 6 in January, marking the first time the reactor systems were operated together with the auxiliary systems. These tests are carried out to confirm whether components and systems important to safety are properly installed and ready to operate in a cold condition. The main purpose of these tests is to verify the leak-tightness of the primary circuit and components - such as pressure vessels, pipelines and valves of both the nuclear and conventional islands - and to clean the main circulation pipes.

Construction of two demonstration Hualong One (HPR1000) units is also under way at China General Nuclear's Fangchenggang plant in the Guangxi Autonomous Region. Those units are expected to start up in 2022. CNNC has also started construction of two Hualong One units at the Zhangzhou plant in Fujian province, plus the first of two units at Taipingling in Guangdong.