South Korea's nuclear safety regulator has given its conditional approval for the start-up of unit 1 at Korea Hydro & Nuclear Power's (KHNP) Shin Hanul nuclear power plant. The Nuclear Safety and Security Committee (NSSC) has called for additional safety measures at the unit - the first of two APR-1400 reactors at the site. 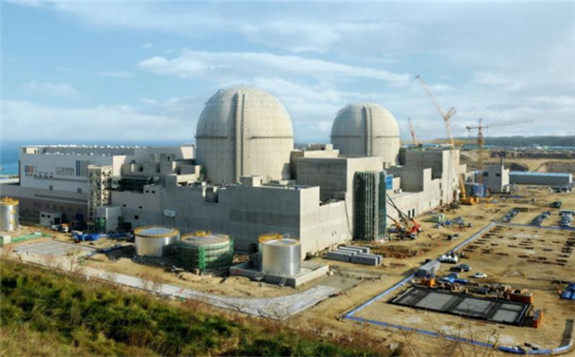 Ground breaking for the first two units at the Shin Hanul (formerly Shin Ulchin) site took place in May 2012. First concrete for unit 1 was poured two months later, with that for unit 2 following in June 2013. The 1350 MWe pressurised water reactors were originally expected to enter service in April 2017 and April 2018, respectively. Following delays, fuel loading in unit 1 had been scheduled for June 2019 but was delayed pending safety checks by the NSSC and some modifications. Commercial operation of unit 1 was then expected in July 2021, and unit 2 in May 2022, but there have been further delays.

KHNP applied for an operating licence for Shin Hanul 1 in December 2014.

In considering the application, the NSSC went through a review by the Korea Institute of Nuclear Safety (KINS). A pre-use inspection of the unit was made in May 2020. A preliminary review by a specialised committee was carried out between June and October last year. The NSSC said it started assessing the application at an official meeting in November. Major issues related to the application were discussed during a total of 18 meetings. On-site inspections were carried out by the NSSC in late February this year.

At a 9 July meeting, the NSSC announced its decision that Shin Hanul 1 satisfies the licensing requirements and issued an operating permit. At the same time, it specified additional safety measures that must be taken at the unit.

The NSSC's review looked into a range of safety issues, including the plant's passive autocatalytic recombiner (PAR). This system is designed to prevent hydrogen explosions in the event of a serious accident by reducing hydrogen concentration levels in the reactor's containment building. Such PAR systems were specified following the March 2011 accident at the Fukushima Daiichi plant in Japan.

The NSSC has also requested more measures against potential terrorist attacks or aircraft crashes during the review. "In order to reduce aircraft accidents, consultations on measures such as limiting the number of flights [over the plant] should be conducted with the relevant agencies before the first planned preventive maintenance, and then follow up measures if necessary," it said.

"In the future, the NSSC plans to thoroughly check the safety of nuclear fuel loading and test operation, which will be carried out following the Shin Hanul unit 1 operation permit, through pre-use inspections," the regulator said.

The APR-1400 is an evolutionary pressurised water reactor with its origins in the CE System 80+ model. Principally designed by Korea Engineering Company, it produces 1400 MWe and has a 60-year design life. It supersedes the standardised 995 MWe OPR-1000 design, of which South Korea built 12. The APR-1400 features improvements in operation, safety, maintenance and affordability based on accumulated experience as well as technological development. Design certification by KINS was awarded in May 2003. In October 2017, European Utility Requirements - a technical advisory group for European utilities on nuclear power plants - approved the APR1400 reactor design. The US Nuclear Regulatory Commission certified the APR-1400 in August 2019, finding the design fully meets US safety requirements.

Construction of the first two APR-1400 units - Shin Kori 3 and 4 - was authorised in 2006, although the actual construction licence was not issued until April 2008. First concrete for Shin Kori 3 was poured in October 2008, with that for unit 4 following in August 2009. Unit 3 was originally scheduled to enter commercial operation at the end of 2013, with unit 4 due to start in September 2014. However, their operation was delayed by the need to test safety-related control cabling and its subsequent replacement. Unit 3 eventually entered commercial operation in December 2016, followed by unit 4 in September 2019.

Four APR-1400s have also been built at Barakah in the United Arab Emirates. The first of these units started commercial operation in April and unit 2 has completed fuel loading and is being prepared for start-up.