The U.S. Energy Dept. wants to leverage proven construction methods as a way to reduce cost and scheduling risks of building new nuclear reactors and has teamed with GE Hitachi Nuclear Energy to demonstrate three technologies that when combined could reduce costs by more than 10%. 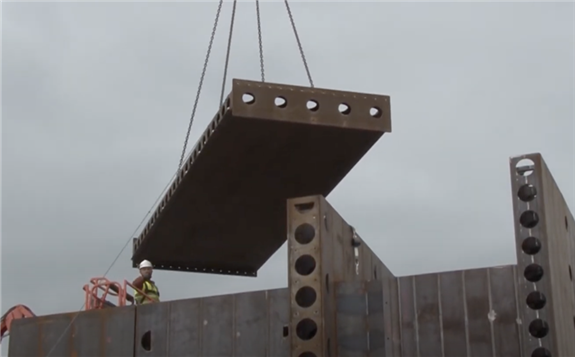 “For advanced nuclear energy to realize its potential, we have to make it more affordable and scalable,” says Ashley Finan, director of the National Reactor Innovation Center at DOE's Idaho National Laboratory.

The center launched the demonstration effort July 7, providing $5.8 million in funding to adapt the three construction technologies, used already in other industries, to a variety of advanced reactor designs that will be available to reactor developers in the next decade.

The project will focus on vertical shaft construction used in the tunneling industry to reduce the amount of excavation needed for reactor construction and eliminate engineered backfill. “This could potentially save $50 million in project costs for a typical nuclear plant that requires 1 million cubic yards of excavation and significantly reduce its construction schedule,” says Finan.

The GE Hitachi team also will further advance the “Steel Bricks” modular steel construction system developed in Scotland by UK-based Caunton Engineering and Modular Walling Systems, which DOE says could significantly reduce need for labor during construction and better meet certain corrosion requirements in nuclear power plants. The bricks have only been manufactured as rectangles, but the team will develop a rounded prototype.

Use of the factory-produced steel bricks could enable large sections of nuclear power plants to be built off-site.

The third method to be demonstrated will be a construction and in-service surveillance program that will combine embedded sensors, 3-D structural and geotechnical models and software that interacts with the physical structure to create a digital twin allowing monitoring during and after construction to evaluate the integrity of the building.

The initial phase of the initiative will focus on technology development and preparation for a small-scale demonstration and includes selecting the site for the project. The second phase will fund construction of the demonstration project.

DOE is seeking $1.8 billion in 2022 for its Office of Nuclear Energy, a 57% increase over past requests and in line with President Joe Biden’s view that nuclear power will play an important role in combating the climate crisis, Katherine Huff, principal deputy energy secretary for nuclear energy, said in a statement.

She said that the request puts a tremendous emphasis on scaling up the commercial deployment of smaller and more flexible advanced reactor designs. The request includes nearly $700 million to help drive advanced reactors to market by 2030

“The Administration believes that we must prioritize activities that preserve the existing fleet of nuclear reactors, deploy advanced reactor technologies, and expand nuclear energy to markets beyond electricity if we intend to meet our ambitious carbon reduction goals,” Huff said.

More than 20 companies are developing advanced reactors, including GE Hitachi, which is developing an Advanced Modular Water Cooled Reactor and a non-water cooled reactor. Other companies include Westinghouse, Holtec International, NuScale Power and X-energy.

DOE has awarded a number of contracts to support the development of nuclear reactors, including $80 million each for two non-water cooled projects, TerraPower and GE Hitachi’s project using molten sodium metal as a coolant and X-Energy’s design to use pressurized helium gas as coolant. The projects could receive between $400 million and $4 billion during the next seven years, the agency said.

TerraPower said on June 2 that it will build a 345-MW demonstration project of its Natrium advanced nuclear power technology, developed with GE Hitachi, at a former coal power plant site in Wyoming at an estimated cost of $1 billion. Its design, licensing, procurement and construction will be managed by Bechtel.

X-energy plans to build a four-unit, 320-MW advanced nuclear plant in Washington state. It signed an agreement in April with Toronto-based Kinectrics to advance the design and deployment of X-energy’s Xe-100 small modular reactor (SMR) in Canada, the U.S. and worldwide.