11 Jun 2021  by World Nuclear News
Unit 1 of the first nuclear power plant to be built in Belarus was put into commercial operation today, Russia's Rosatom has announced. The milestone took place following the transfer of the 'acceptance certificate', signed by the general designer and general contractor of the project - Rosatom subsidiary AtomStroyExport (ASE) - to the customer, Belarusian NPP. ASE. is responsible for the "operability" of the power unit equipment during the unit's warranty period, Rosatom said. 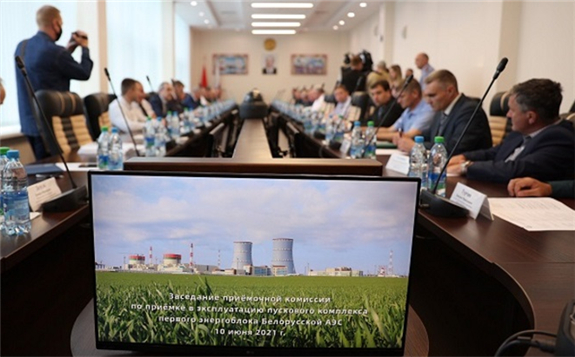 "Handing over to our Belarusian colleagues the symbolic key for the country's first nuclear power unit, I can say with full confidence that Belarus has become the owner of the most modern and safest facility," ASE President Alexander Lokshin said. Addressing the general director of Belarusian NPP, Mikhail Filimonov, he added: "Now you will need this key no earlier than 80 years from now, to close the plant."

The unit is the first VVER-1200 to enter operations outside Russia.

The physical start-up of Ostrovets 1 began on 7 August last year and it was connected to the national grid on 3 November. On 22 December, the pilot operation phase commenced. It reached 100% of its nominal capacity for the first time on 12 January. It was issued with an operating licence on 2 June.