07 Jun 2021  by World Nuclear News
Ukrainian nuclear power plant operator Energoatom told ambassadors of the Group of Seven (G7) and the head of the EU mission in Ukraine that it has "made significant progress" with its strategy to diversify its sources of nuclear fuel. During their meeting on 2 June, the state-run company described the issues it faces related to its 'corporatisation', including 'discrimination' in the wholesale electricity market, as well as the safety and upgrade work at its reactor units. 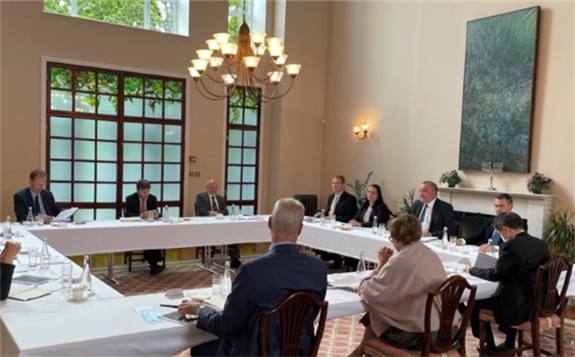 Energoatom said the diplomats welcomed its efforts to increase its efficiency and voiced their support for its development plans.

In a separate statement, Energoatom said electricity market manipulation demanded "urgent and decisive action" from the regulator, and said recent measures to address this were inadequate.

On 1 June, the Ministry of Energy held a meeting with Energoatom, Ukrenergo, SE Market Operator, SE Guaranteed Buyer, Ukrhydroenergo and Centrenergo, as well as other power producers and suppliers.

Energoatom told the meeting participants that price formation in the market was threatening security of electricity supply, negatively impacting preparations for the autumn-winter period, and posing risks to synchronisation of the Ukrainian grid with the ENTSO-E transmission network.

The participants also discussed the prospects of temporarily setting a minimum price in the day-ahead market at a level not lower than Energoatom's production cost. They also discussed the matter of debt repayments to producers in the balancing market.

On 3 June, Energoatom management held a video conference with representatives of uranium enrichment company Urenco, which is one of Westinghouse's nuclear fuel suppliers.

Kotin described Urenco's cooperation with Energoatom over the past decade as "extremely important". He said: "This is a significant contribution to the diversification of the supply of nuclear materials and nuclear fuel to meet the needs of Ukrainian nuclear power plants."

Since 2010, they have signed three contracts for the supply of nuclear materials for the production of nuclear fuel by Westinghouse. Their current contract was signed in July 2019.

They are now considering increasing the volume of supplies of nuclear materials under that contract and attracting funding under the UK government's export support programme, which is being implemented through UK Export Finance, the UK's export credit agency.

Energoatom has also announced that peer reviews of its nuclear units by the World Association of Nuclear Operators (WANO) will begin from next year. These will be conducted by WANO's Paris Centre, with which Energoatom signed a Memorandum of Understanding and Cooperation in 2019. The first of these will be at the South Ukraine nuclear power plant, in the autumn of next year.

Per Therén, head of the evaluation team at WANO's Paris Centre, said in an Energoatom statement: "This is a project in which we are establishing cooperation between the three sides of the process: the Moscow Centre, the Paris Centre and Energoatom. We all have a common goal - to achieve a high level of nuclear safety."

Energoatom gained experience of WANO reviews at its Rovno nuclear power plant, when WANO completed its first ever cross-centre review at the turn of 2017.