President Joe Biden said Monday the U.S. government would replace the entire federal fleet of cars, trucks and SUVs with electric vehicles manufactured in the United States, a commitment tied to a broader campaign promise to create 1 million new jobs in the American auto industry and supply chains. 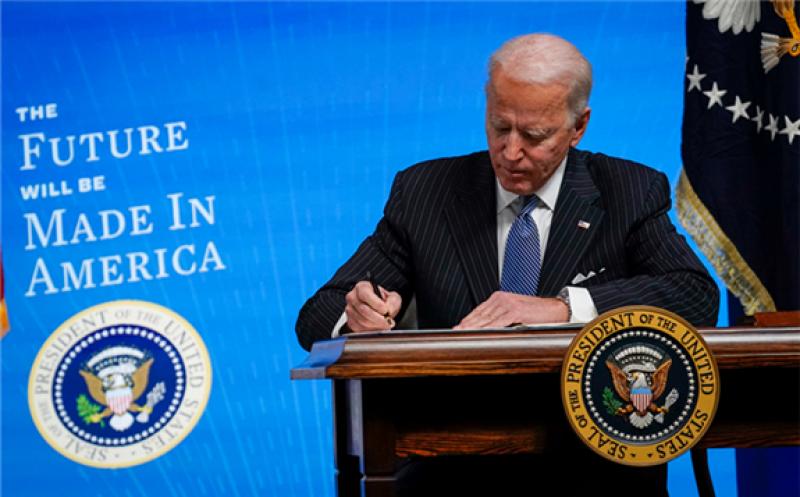 The commitment, if it bears out, could give a boost to U.S. automakers, particularly those that have diverse portfolios that include passenger cars, commercial vans and light trucks.

Biden made the comments prior to signing the Made in America executive order, which places stricter rules on the federal government’s procurement practices. The government has existing “buy American” rules, which states that a certain amount of a product must be made in the U.S. for a purchase to qualify for a federal contract.

Biden said this order closes loopholes and aims to increase purchases of products made in the United States. The executive order increases that product threshold and the price preference for domestic goods — meaning the difference in price from which the government can buy a product for a non-U.S. supplier. It also updates the process for how the government decides if a product was sufficiently made in America.

In the midst of his speech, Biden said the buy American directive would extend to the federal government’s massive fleet of vehicles.

“The federal government also owns an enormous fleet of vehicles, which we’re going to replace with clean electric vehicles made right here in America, by American workers, creating millions of jobs — a million auto worker jobs.”

The opportunity is a large one. The U.S. government had more than 645,000 vehicles in its fleet in 2019, the most recent data available from the General Services Agency. Of those, about 224,000 are passenger vehicles and more than 412,000 are trucks.

“GSA is committed to exploring opportunities to leverage the purchasing and leasing power of the federal government to address the climate crisis, including greening the federal fleet,” a GSA spokesperson told TechCrunch in an emailed statement. “GSA currently manages over 224,000 passenger vehicles in its fleet to support the Federal Government’s mission. By leveraging clean energy vehicle technologies, GSA will support the President’s climate goals, while working with the American automotive manufacturing industry to ensure that these next generation vehicles are built in America by American workers.”

The directive won’t be easy to fulfill. Many of these federal vehicles are leased, which could slow the transition depending on the contract lengths. There are other obstacles, including charging infrastructure and supply. And while it doesn’t appear to be a requirement, Biden has publicly stated numerous times — including Monday — that he supports union automotive jobs.

Tesla is considered the dominant U.S. manufacturer of electric vehicles. However, the company’s lack of union workers and the higher cost of its vehicles — even the less expensive Model 3 — could be a barrier.

Ford and GM might not have a vast supply of electric vehicles at the moment, but they do have union shops and both automakers are investing heavily to expand their EV offerings.

GM launched a new business unit earlier this month to offer commercial customers an ecosystem of electric and connected products as part of the company’s $27 billion bid to become a leading electric automaker. The new business, called BrightDrop, will begin with two main products: an electric van called the EV600 with an estimate range of 250 miles and a pod-like electric pallet dubbed EP1.

GM has said it plans to bring 30 new electric vehicles to a global market through 2025. More than two-thirds of those launches will be available in North America and every one of GM’s brands, including Cadillac, GMC, Chevrolet and Buick, will be represented, according to the automaker.

Meanwhile, Ford revealed in November a configurable all-electric cargo van called the E-Transit as part of its $11.5 billion investment in electrification. Ford has largely focused its electrification efforts on the consumer market, notably the Mustang Mach-E. The E-Transit, which will be built at its Kansas City Assembly Plant in Claycomo, Missouri, is aimed at the commercial sector.

There are a growing number of newer EV entrants as well, including Rivian, Lordstown Motors and Fisker. Rivian is expected to begin producing and delivering its electric pickup truck in July, followed by its all-electric SUV. Rivian is also developing and assembling electric vans for Amazon.

Biden’s call to transform the fleet supports statements he made throughout his campaign. Biden pledged to “use all the levers of the federal government,” including purchasing power, R&D, tax, trade, and investment policies to position the U.S. to be the global leader in the manufacture of electric vehicles and their input materials and parts.

This article is reproduced at techcrunch.com