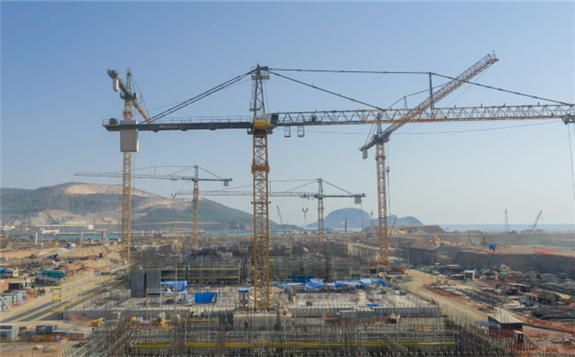 The licence, which was granted on 13 November, follows the regulator's review of the application it received on 28 March 2019. Work can now start on building all the reactor and turbine buildings for the unit, as on the installation of systems and equipment related to nuclear safety. A limited building permit for the unit was awarded on 23 July.

Alexey Frolov, managing director for government relations and international cooperation at JSC Akkuyu Nuclear, said that, within the framework of the previously obtained limited permit, the concrete preparation of the foundation slabs of the reactor building and the turbine building are being completed at the construction site. The foundation slabs will be reinforced and then, thanks to receipt of the full construction licence, the company can proceed to concreting the foundation.

Permits issued for the project also include: a positive conclusion on the environmental impact assessment report; a licence for electricity generation; licences for the construction of units 1, 2 and 3; and temporary permission to operate the Vostochny cargo terminal. The NDK is now considering the company's application for a construction licence for unit 4, which it submitted to the regulator on 12 May, Frolov said, according to a statement from Rosatom yesterday.

Comprising four VVER-1200 units, the Akkuyu NPP project will be the first in the global nuclear industry to be implemented according to the Build-Own-Operate model. Once complete, the plant is expected to generate about 35 terawatt hours of power each year, enough to provide 90% of the annual electricity demand of a large city such as Istanbul, and to meet up to 10% of the electricity needs of the whole of Turkey.

Turkey aims to bring unit 1 online in 2023, the centenary of its foundation as a republic.