Progress is made in getting blades up to wind farms located in a very tricky terrain – the mountains – with difficult access, steep slopes and curves of up to almost 180º. 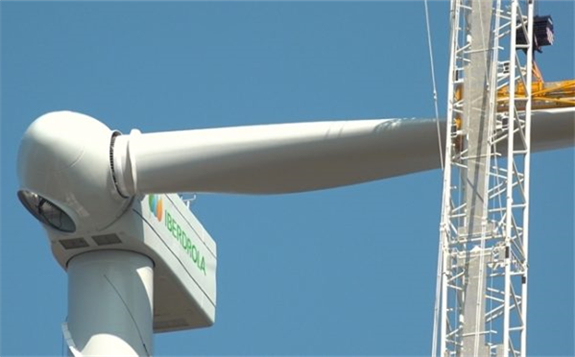 It is undertaking four projects of 130 MW of power, which will triple its installed capacity in the region and allow the generation of employment for more than a thousand people

Almost all of the field work and civil works, as well as some components of the wind turbines, is being performed by companies from Asturias

Iberdrola is making progress in Asturias on the most comprehensive wind energy infrastructure project currently underway in Spain: the construction of three of the four wind farms (Cordel-Vidural, Capiechamartín and Panondres) that it has planned for the region, all of which will require an investment of more than €100 million. The company will also start the construction of the fourth project, Verdigueiro, once the administrative authorisations are obtained. This new capacity – 130 MW of wind power – will allow it to triple the installed power it has so far in Asturias.

This week the company commenced the assembly work of the wind turbines, having finished the civil work, planned the arrival of materials at the wind farm sites and organised the different actions to be performed in the field. Up to 400 people are involved in these tasks.

To reach the level of the wind farms, the materials (towers, nacelles and blades, among others) are transported along narrow single-access roads with numerous slopes and bends of up to almost 180º. This activity has required exhaustive planning to avoid effects on the planned works and to make possible the arrival of up to 200 daily shipments with different materials.

At an altitude of 800 metres, and in an area with constant weather shifts that make work difficult, large wind turbines are already being erected: blades of 56 metres in length, nacelles weighing 126 tonnes and towers of between 80 and 93 metres in height.

The construction of these projects is contributing to the revitalisation of the local industrial framework and will make it possible to generate up to 1,000 jobs.

Almost all the field work and civil works are being carried out by Asturian companies such as Hormavasa and Horvalsa, Canteras Rencanos, Deymet, Excade, Posada, Méndez y Mota, Gruas Roxu and Taxus; the project is being developed by ERPASA and the manufacturing of the wind turbine towers, for example, is being carried out at the Windar facilities in Avilés.

In this way, the company is contributing to the consolidation of a model in which Asturian companies and the generation of employment are oriented towards sectors of the future, such as renewable energies.

Once in operation, the wind farms will generate energy to supply more than 100,000 homes and avoid the emission of 65,500 tCO2/year.

Iberdrola has defined four areas of action related to energy transition as its contribution to the socio-economic development of Asturias: more investment in renewables, support for job creation by offering opportunities and contracts to local industry, the training of young people in the skills required by the employment sectors of the future and the development of new innovation projects, such as the creation of a Citizens’ Innovation Platform.

In addition to the construction of 130 MW of wind power, the company is helping with the opening of new markets for local industry, with the awarding of contracts to Asturian companies that as of July amounted to €200 million euros, multiplying fourfold the average purchases from Asturian suppliers made by the company each year.

These projects will enable companies from Asturias to take part in growth sectors in Spain and international markets and also create thousands of jobs in the region.

Iberdrola’s contribution in Asturias also includes the creation of a Citizens’ Innovation Platform, to promote entrepreneurship and innovation in the region, and the implementation of training programmes in the energies of the future for Dual Vocational Training students, colleges and universities in the region, with the aim of turning future generations into active players in the energy transition.

Iberdrola is convinced that the recovery of the economy and employment will have to be green. This commitment has led it to earmark record investments this year of €10 billion in renewable energy, smart grids and large-scale energy storage systems, after having allocated €25 billion since 2001 in Spain – rising to €100 billion worldwide.

Iberdrola is the leader in renewable energies in Spain, with installed wind capacity of more than 6,000 MW and over 16,600 MW in renewables. Worldwide, the total amounts to 32,700 MW, making its generation facilities among the cleanest in the energy sector.