Mexico Plans to Design and Build the First Electric Car

The state of Puebla in Mexico has been home to the country’s auto manufacturing business for almost a century. In the capital city, also called Puebla, entrepreneur Polo Ortiz is working with his son Leopoldo on plans to design and build the first electric car designed and built in Mexico using Mexican workers and Mexican parts. 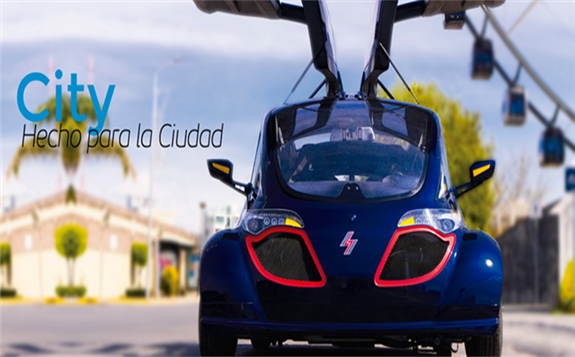 “This is in our genes; it’s like a century-old tradition,” Polo tells Fronteras Desk. Like his father, Polo is a race car driver. And now he is helping his son Leopoldo design and build an electric two-door coupe called Thalia, which is expected to go into production in 2020. Leopoldo’s company, LM & TH Automoviles, is currently building electric bicycles and tricycles, but the dream of building electric cars is what excites Polo and Leopoldo.

The car is named for Leopoldo’s daughter, Thalia. “Lucky name for our car,” Leopoldo says. “This is the first car in the history of Mexico that we made from the design, from the first sketches, to the production of the prototypes.”

“We are proudly a 100% Mexican company,” Polo says. “Unfortunately, the Mexican government is always looking towards the wrong direction,” like opening refineries instead of supporting environmentally-friendly technologies.

Leopoldo says Puebla is the only Mexican state where the auto industry can work on design and manufacturing, rather than just in production lines. “Why? Because we have the people and we have the facilities and the resources to make that.”

Making a car from 100% Mexican parts is a challenge, however. “We bought some kits from the United States, and at the end we saw that they’re getting these kits from China,” Leopoldo recalls. So it is sourcing about 20% of the car’s parts from China while attempting to find a supplier in Mexico.

The Thalía will sell for about $18,000 and will be offered for sale first in Mexico’s larger cities, with online sales to other regions and countries to follow. Specifications have yet to be released but it is likely to be a city car, not a long-distance tourer. The initial production target is 30 cars a month. If that seems low to you, perhaps knowing that only 25 electric cars were sold in Mexico in April may help put things in perspective.

Luis González is the Innovation and Design Commissioner for the state of Puebla. His job is to help innovative and creative companies like LM & TH grow and expand into global markets. “We are not only like a distribution center of opportunities, we also make the different ministers work together … which is also not very common,” he says.

He adds that the automotive industry in Puebla is still the biggest contributor of the state’s economy but it’s time for developing more creativity and less manufacturing. “I think the number of robots that have been bought in the industry has tripled in the last three years, so that means that each robot will take the place of many people working,” González said.

He wants to link Leopoldo Ortiz’s company with businesses and venture capitals from cities like Graz, Austria, which is known as “the Silicon Valley of the Alps.” But the federal government is cutting budgets for innovation. The administration of president Andrés Manuel López Obrador recently shut down the National Institute of Entrepreneurship.

“You shouldn’t block what you don’t understand. I think that’s the problem,” Leopoldo says. But he and and González believe Puebla will create a new auto industry in Puebla even without help from the government. The Thalia electric coupe is the beginning of that manufacturing renaissance but it is far from the ultimate goal of Leopoldo Ortiz and Luis Gonzalez.