10 Jul 2020  by neimagazine.com
Anastasia Zoteeva, director general and chair of the Board of Directors of Akkuyu Nuclear, has said that it took some time to combine the strategies of Turkish and Russian builders in the construction of Turkey’s Akkuyu nuclear power plant.

“There are a lot of facilities at the nuclear power plant, therefore, work is being carried out simultaneously on many fronts,” she noted. Some 6000 people were currently working on the site, most of them are Turkish citizens. 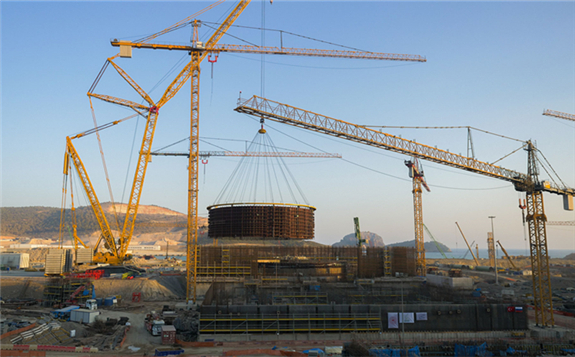 Recently the first concrete was poured for the second reactor at Akkuyu and the second tier of the reactor building's internal containment was installed at Akkuyu 1.

Zoteeva said cold testing of the first reactor should be carried out by 2022. In 2020, after the start of the production localisation programme, the construction site was fully supplied with Turkish-made equipment. As to training, she said 143 Turkish citizens had already completed their studies in Russia and were taking part in the Akkuyu project, while 120 were continue their studies.

The $20bn Akkuyu nuclear plant will comprise four 1200MWe VVER-1200 reactors and is expected to meet about 10% of Turkey's electricity needs. It is the first nuclear plant to be built based on a build-own-operate (BOO) model.

In May, Zoteeva, in an interview with Inside WANO, said the BOO model provides long-term sustainability and investment returns for project stakeholders. Under this model, the plant supplier (Rosatom) is also the investor/co-investor and owner/co-owner of the NPP gaining returns on its investments during operation stage from electricity sales. Turkey will receive incomes during the entire plant operating life, currently estimated at 60 years, with the possibility for extension.

Rosatom agreed to complete the construction and start operation of Akkuyu 1 within seven years of the required licences and permits being granted by the Turkish regulator. Turkey agreed to provide support during the licensing stage, to provide title rights for the land, as well as provide for the permit documents’ execution.

“In order to implement the project, Akkuyu Nuclear is required to obtain about 120 different licences and permits,” Zoteeva said. “Today, many of the key licences and permits required for the project implementation have been obtained, including for the approval of the EIA, the licence for electricity generation, the licences for construction of units 1 and 2, as well as permit to use the Eastern Cargo Terminal and to operate the Marine Terminal facilities.”

She noted that both engineers and qualified workers are in demand during the construction phase and the employment of personnel available on the Turkish labour market is encouraged. However, there is a “noticeable shortage” of nuclear industry experts in Turkey, Zoteeva said.

To address this, a specialised training centre to train engineering specialists and reactor operating personnel will be built at the Akkuyu site. Construction is now under way, and over the next three to four years the scope and scale of the work will increase.

“Since the costs of personnel bringing from Russia or other countries are high a lot of job opportunities especially for the Turkish citizens are being created within such a large-scale project. Currently about 80% of the employees of the Akkuyu NPP construction site are Turkish,” Zoteeva added.

In 2019, Akkuyu Nuclear prepared a three-year plan of cooperation with the World Association of Nuclear Operator’s Moscow Centre. In 2020-2021, the Moscow Centre will send six support missions focused on different areas of improvement for the Akkuyu NPP. These will focus on areas such as production activity, organisational efficiency, supervision and leadership, engineering support strategy. Akkuyu staff will also participate in more than 40 seminars, working meetings, and partner visits held under the guidance of WANO.