Nuclear power will give Poland energy security, keep its rapid industrialisation cost-competitive and help it to achieve climate neutrality, Minister of Climate Michał Kurtyka said during a Nuclear Energy Agency (NEA) WebChat this week. In conversation with NEA Director General William Magwood, Kurtyka said Poland had long-coveted nuclear power and was looking forward to the many benefits it offers as the country plans a clean energy future. 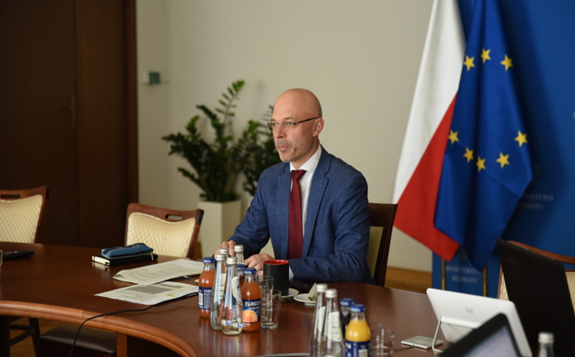 Kurtyka was secretary of state at the Polish energy and environment ministries before becoming president of COP24, which was held in Katowice in December 2018. A year later, he was appointed head of the newly formed Ministry of Climate.

Poland aims to cut the share of coal in its electricity mix from 80% to 32% by 2040 and to introduce 6-9 GWe of nuclear capacity that would account for 18%. It plans to start construction of its first reactor in 2026, with commissioning in 2033, and to have a further five units in operation by 2040, Kurtyka said. Magwood noted that this achievement would make Poland one of the biggest nuclear power producing countries in Europe. Nuclear power will replace the role of coal in Poland as a supplier of stable baseload capacity, the minister said. The country will "keep its conventional power plants for as long as necessary for energy security, but it is building a zero-emissions system of which nuclear energy is a very important part", he said.

At the same time, the country is developing its renewable energy capacity, which currently totals 9500 MWe. Offshore wind conditions are favourable thanks to Poland's proximity to the Baltic Sea, while the uptake of rooftop solar PV panels is "booming", he said, with about 200,000 such electricity "producer-consumers" to date. The cost of solar PV energy may be falling, particularly in southern parts of the world, he said, but energy security must been seen as part of the "larger energy equation". Solar power can provide Poland with about 1100 hours of electricity a year, he said, "So we still have the more than 7000 hours left to fill".

"It's not only a question of comparing how costly it is to produce electricity by this or that technology at a given hour, but whether we can satisfy the entire spectrum of demand, 365 days a year, 24 hours a day, whether the sun is shining and the wind is blowing or not. We can't, from one second to the next, stop elevators and air conditioning units, or cut electricity supply to hospitals and schools. Photovoltaic energy has its place, but stable nuclear power has its place as well."

The cost of nuclear power projects "varies enormously" from country to country, Kurtyka said, and depends on the ability to construct on time and to budget, and also on the cost of capital. He noted a trend towards electricity supply being driven more by production than by demand, hinting at the influence of market mechanisms, such as feed-in tariffs. Magwood added that system costs are often underestimated in an evaluation of the true cost of nuclear compared with renewable energy.

Nuclear energy "has many faces", Kurtyka said, and its value to Poland is not limited to electricity. The country is actively researching high-temperature gas-cooled reactor (HTGR) technology to serve its chemical and fertiliser industries that currently rely on cogeneration plants that will need to be replaced within the next 15 years. Magwood noted that such industries account for about 30% of all industrial CO2 emissions globally.

The minister said the "conversation around climate" has been focused on electricity, but the majority of energy consumed in Poland is heat. The country has more than 500 district heating systems, he said, adding that he has been talking to the Japan Atomic Energy Agency on the design of its 30 MWt graphite-moderated HTGR.

The climate debate has moved on, Kurtyka said, from the European Council's adoption in 2009 of a legislative package designed to achieve the EU target of a 20% reduction in greenhouse gases (from 1990 levels), to include the 2015 Paris Agreement on climate neutrality. That means "getting emissions balanced with absorption in the second half of the 21st century", he said, by taking into account emissions produced by the energy sector, including heat, but also by the transport sector. HTGRs can play a further role in that respect, he said, in providing a source of production of zero-emission hydrogen.

The European Green Deal Investment Plan, which the European Commission unveiled in January, aims to help coal-producing regions, like Poland, move away from fossil fuels. Poland said it would wait to see financial incentives and later announced it had secured an exemption on the EU target to be climate-neutral by 2050. The Green Deal overlooks nuclear power, however, as does the green recovery plan from the coronavirus pandemic that the European Commission announced last month.

During his conversation with Magwood, Kurtyka did not mention this omission, but said it was important that the EU had "put its Green Deal at the heart of the European project and of the economic revival post-COVID".

EU financial incentives or not, Poland is in an enviable position economically.

Kurtyka noted that it was the only EU country to avoid recession after the 2008 financial crisis and, according to a European Commission forecast published last month, its economy is set to be the least affected by the COVID-19 pandemic. Its energy transition requires international support, however, not only technologically but financially too, he said.

"We need to make sure we have financial foundations which make sure the energy produced by nuclear power plants will be competitive. So getting the right sources of financing is a key element for the feasibility of our energy solution," he said.

Poland has research reactors, but no experience of operating nuclear power plants. "We have more than 100 companies taking a very active part in various nuclear construction projects all over the world and so there is an industrial base on which we can develop, but we need international partners interested in the development of nuclear power plants, having the appropriate technology and providing us with security over the lifetime of the plants' operations," he said.

Magwood asked him about the power sector's engagement in the COP process "at the practical level", and Kurtyka replied that the sector was motivated by "technological feasibility and economic profitability".

"If there are technologies which are workable, then there are industries that are interested in getting them on board. Then, it's our role as governments to create public acceptance and also give people what they are expecting from the energy transition," he said.

"The challenges are very different in Africa, where there are still hundreds of millions of people without electricity, to those in the EU where you have lots of old power plants that need to be replaced and where it's much easier somehow to speak about new technologies.

"So there are different challenges but without doubt industries will be looking very much to the essentials - technology, profitability and more and more to sources of financing. And here we see also a shift in terms of the expectations of the financial community about which projects, which energy transitions, are favoured by financial institutions, and this in turn is internalised by the energy sector."

Magwood asked whether the required "market signals" were in place.

Kurtyka said: "The situation varies by country, but in Poland we have large energy entities that are combining different assets - distribution, renewables and also conventional power plants, which are not easily financed by the international finance community. It's a question of whether or not some banks are willing to finance, for example, fossil fuel generation. The same is being discussed at the EU-level - how to make sure that the finance equation is not penalising unnecessarily."

There is "overwhelming" support for nuclear power among Poles, he said, because the topic is not new for them.

"We wanted to build our first nuclear power plant at the end of the 80s, but that wasn't possible due to the political transformation. After 1989, Poland became a fully sovereign country and we faced a very brutal economic transition. Industrial output fell by 25% at least in 1991-1992, so there was an over-capacity of the Polish production system and therefore no rationale for building a nuclear power plant at that time," he said.

"Poland was an exception in the Soviet Bloc in not having a nuclear power plant," he added, so returning to this discussion 30 years later is "symbolic".

Magwood noted the importance of the societal aspect of the low-carbon transition and Kurtyka recalled the adoption of the Just Transition Declaration signed by over 50 countries and parties to the climate convention, at COP24 in Katowice.

Katowice is the capital of Silesia, a region with a long mining tradition that still bears the scars of economic decline, he said. Poland's economic transition aimed to ensure that "no one is left behind", which means providing new jobs in regions where existing ones disappear, he added.

Asked about the brain drain of nuclear graduates away from Poland, Kurtyka said it was a challenge for the global nuclear industry to maintain a sufficient number of trained personnel and so the response needs to be an international effort. Through partnerships, the industry could ensure that personnel trained for a nuclear power project would be able to move on to employment at others around the world.

Just as the nuclear community works best through international collaboration, "multilateralism built around shared goals, loyalty and common acceptance" are essential at COP summits, he said.

COP24 and an International Energy Agency energy summit a year later both produced "historical successes" in climate and energy thanks to "goodwill, transparency and leadership", he said, referring to the Katowice Rulebook and the IEA Ministerial Communiqué.

Asked by Magwood about the opportunities for success at COP26, which the UK has had to postpone to November 2021 owing to the pandemic, the minister said it will be a particularly important summit because greenhouse gas emission reduction targets for 2030 are scheduled to be discussed. He predicted that COP meetings will move from being "traditionally a governmental process" to "more and more a stakeholder process". He said: "It will be more a question of how and less a question of by how much."