The urban community of Paris – Vallée de la Marne (CAPVM) and GéoMarne have announced that they have successfully completed the strategic phase of the Champs-sur-Marne geothermal drilling campaign, which began in early December 2019. 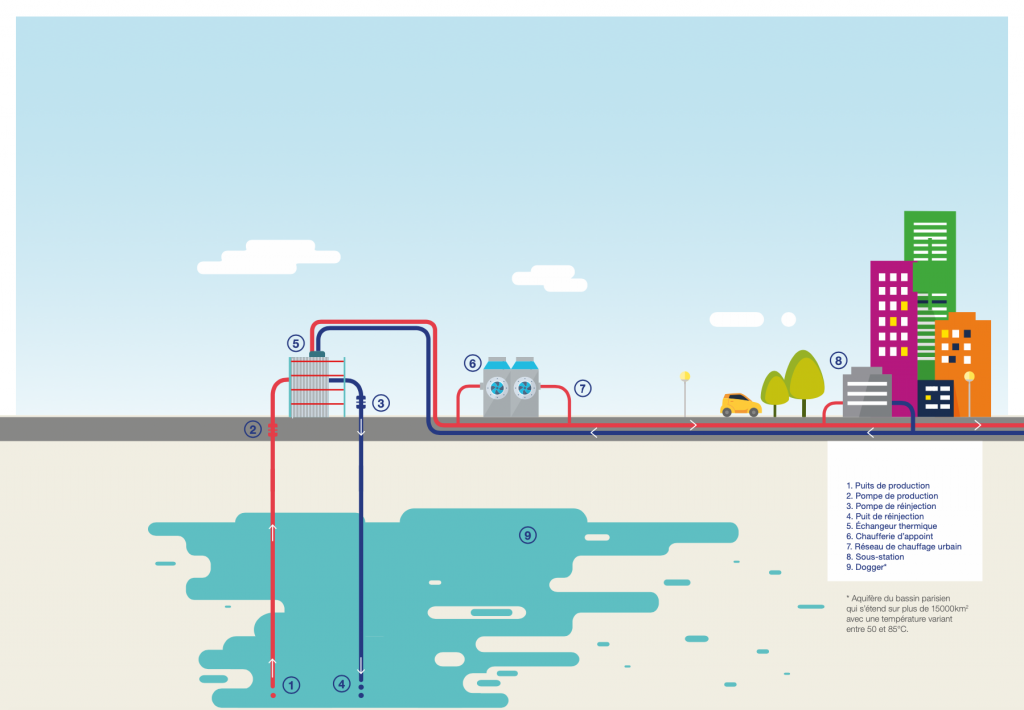 The objective of the campaign was to reach a depth of 1,900 m to benefit from water that will ultimately provide entirely green heat sufficient to heat the equivalent of 10,000 homes in the municipalities of Champs-sur-Marne and Noisiel in the greater Paris area of France..

After three months of work in the heart of the Descartes city of Champs-sur-Marne, the GéoMarne teams have successfully finalized two deviated 1,900 m wells.

ENGIE Solutions is now able to confirm the geothermal resource in terms of flow and temperature: water at 70 degrees Celsius will be drawn with a flow of 350 cubic m/ h, data in accordance with studies previously carried out by geoscience experts.

Innovative, these wells have enabled the installation of casing with smooth fittings allowing the production parameters of the wells to be increased.

The end of the drilling and the conclusive tests carried out since then make it possible to start construction of the network and the layout of the supply substations to connect future subscribers to the heating network in a few weeks. Without forgetting, during 2020, the start of construction of the geothermal heating plant and the installation of its equipment, in order to ensure the supply of heat by the end of 2021.

This is a territorial project supported by ADEME and the Ile-de-France Region.

This district heating network to be fed by 82% with geothermal energy represents an investment of EUR 40 million. The Ile-de-France region is supporting this project with EUR 4 million, or 10% of the investment, fully transferred to the benefit of customers who benefit from a reduction in the price of heat. This support is part of the implementation of the regional energy-climate strategy which, by choosing an ambitious scenario, has chosen an objective of multiplying the production of renewable energy with geothermal energy by a factor of 3.5 compared to the 2015 production.

As part of the Chaleur Fund, ADEME is providing financial support of EUR 6 million to this ambitious project, thus contributing to the development of deep geothermal energy in eastern Paris.

The end of the project also marks the end of the crowdfunding for the GéoMarne project. Indeed, local citizens and more broadly, Ile-de-France residents, had the opportunity to take part in this project anchored in the transition to an ever more virtuous energy mix thanks to a device open to the Lumo platform, in three phases: first to the inhabitants of Noisiel and Champs-sur-Marne, then to all of those administered by the CAPVM and finally, to Ile-de-France. This collection reached its threshold of EUR 1 million in early February.

In this process of opening up the project to citizens, more than 400 visitors (residents, co-ownership representatives, landlords, partners, etc.) also had the opportunity to visit the drilling site and discover the different players: the drillers, the drilling fluid teams, geologists and deflectors.