The European passenger plug-in market had some 37,000 registrations in May, growing 28% compared to the same period last year, a good performance considering the stagnating performance (+0.04%) of the overall market.

Looking at other fuels, diesel sales continued their never-ending slide, with diesel’s share dropping from 36% to the current 32%.The big model news in May was the Mitsubishi Outlander PHEV reaching the runner-up spot, for the first time since January.

Interestingly, despite the landing of the Tesla Model 3, all the remaining top 5 best sellers had 30%-plus growth rates, which is good news. 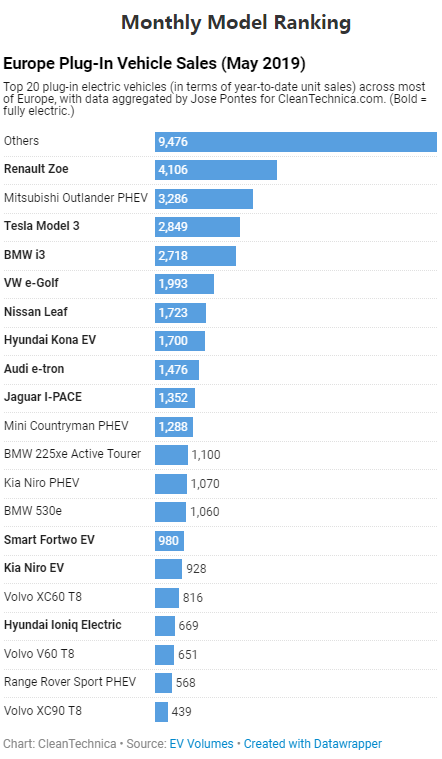 #1 Renault Zoe – The 4,106 deliveries of May signaled a 62% growth rate for the French hatchback, an impressive performance considering the much improved “new” Zoe and the upcoming Peugeot e-208 and Opel e-Corsa are just a few months away. As for individual market performances, the Zoe continued to get the largest portion of its sales from its domestic market, 1,331 units, up 23% year over year (YoY). There were also positive numbers in Germany (875 units) and Italy (448 units, a new record). In Italy, note that Renault is benefitting from new incentives to reach new heights, beating its personal best performance for the second time in a row.

#2 Mitsubishi Outlander PHEV – The Japanese SUV seems unfazed by the passing of time and the arrival of new models, being the only PHEV able to follow the pace of the best selling BEVs in the region. The Mitsubishi model scored 3,286 registrationsin May (up 121%!), continuing to be popular in the UK (700 units), but interestingly, the main market for the Outlander is now Germany, with a record 957 registrations. Other markets also racked up large number of units (Sweden – 365; Norway – 310; France – 223). This is a case study of a PHEV succeeding in a BEV-friendly environment, but in the long run, one wonders how long the Outlander PHEV will resist the BEV wave. That said, with no direct BEV competitor in the short term, the Mitsubishi model could still pick up a lot of sales this year without major worries.

#3 Tesla Model 3 – After a delivery peak in March, the poster child for electromobility dropped to more normal performances, with Tesla delivering 2,849units of its sports sedan, while it prepared itself for another high tide in June. Looking at individual markets, the midsize model was mainly delivered in Norway (705 units), Germany (317), the Netherlands (419), and Sweden (198).

#4 BMW i3 – The German hot hatch’s sales were up 56% in May, to 2,718 units, with the BMW pocket rocket benefitting from a unique formula (it is the only premium city EV in town) to continue progressing its sales. Looking at individual countries, Germany (878 units), Norway (344), and the UK (310) were the main markets. Looking into 2019, expect the Star Wars–inspired EV to continue growing fast (despite some BMW executives thinking no one wants EVs). It should continue to be a regular face in this top 5.

#5 Volkswagen e-Golf – Volkswagen’s electric Golf managed to reach the 5th spot in May, with 1,993 registrations, up 34% YoY, an amazing performance considering the Wolfsburg Mothership has entered full-ID-mode, advertising the new BEV family like it didn’t already have one successful model in the market. But then again, I guess VW knows the ID.3 appeals to a different kind of public (more extroverted) than the current e-Golf audience (which prefers to go EV-unnoticed). I wouldn’t even be surprised if the German automaker decided to keep both the e-Golf and the ID.3 sharing the VW dealerships for a while. … But back to the e-Golf’s sales performance in May — the main markets were Norway (779 deliveries), Germany (310), and the UK (290). Okay, that’s it for now. 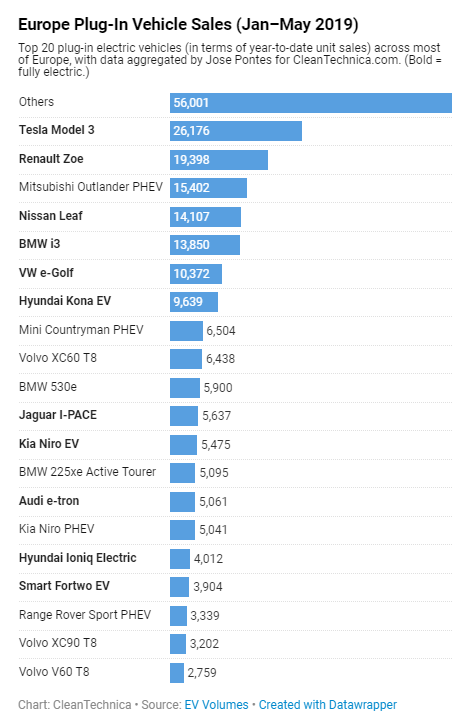 Looking at the 2019 ranking, the main news was the Mitsubishi Outlander PHEV surpassing the Nissan LEAF and reaching the 3rd spot, returning to the podium for the first time since February. The Japanese SUV is the only plug-in hybrid in the top 7 positions.

As for the Nissan hatchback, it really needs a shot of the coming 62 kWh version’s registrations to stop losing further spots, as the #5 BMW i3 is closing in fast.

Speaking of BMW, there was only one other change in the top 10, to the benefit of the BMW Group’s Mini Countryman PHEV, which climbed one position, to #8. 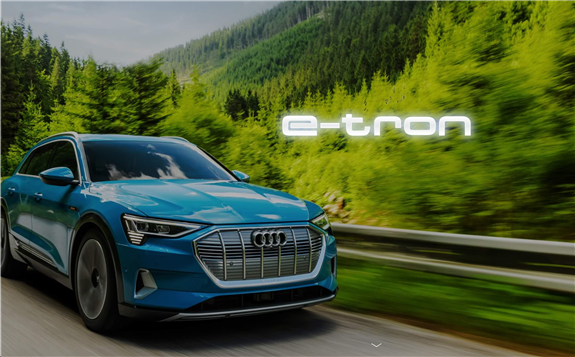 In the second half of the table, things remained relatively stable, with the Audi e-tron slowly continuing to climb positions. The German SUV is now in #14, while the #11 Jaguar I-PACE, after surpassing the Kia Niro EV, is now looking to surpass the #10 BMW 530e, just 263 units away.

The #17 Smart Fortwo EV scored 980 units, its best result in the last 16 months, a promising result given the rumored 30 kWh battery update later this year.

In #18, we now have the Land Rover Range Rover Sport PHEV, a model almost the size of its name, that managed to surpass the Volvo XC90 PHEV. The British SUV thus became this year’s new best selling plug-in hybrid Yacht.

Below this ranking, we should note the good performance of the new Mercedes E300e/de twins, with 833 registrations last month, a new record for the plug-in E-Class. That put the nameplate just 200 units from the top 20.

But another full-size plug-in car is even closer to joining the top 20 — the Tesla Model S is just 104 units behind the #20 Volvo V60 PHEV. With the Tesla tideexpected to have a peak in June, the Model S should join the top 20 without problem, and even the Model X (642 units in May, 2,481 YTD) might have a shot at reaching #20. 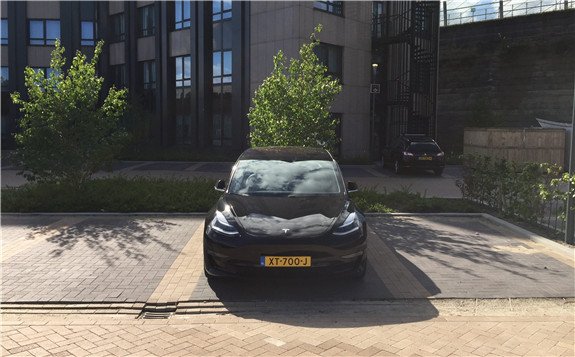 In the manufacturer ranking, Tesla (15%, down 1%) is the leader, while last year winner BMW (14%, up 1%) is a recovering runner-up, but with June’s Tesla deliveries ready to be logged, expect the California-based maker to jump ahead again.