Results of an extensive 2D seismic campaign in the region of Frankonia in Bavaria/ Germany show a promising potential for geothermal energy utilisation. 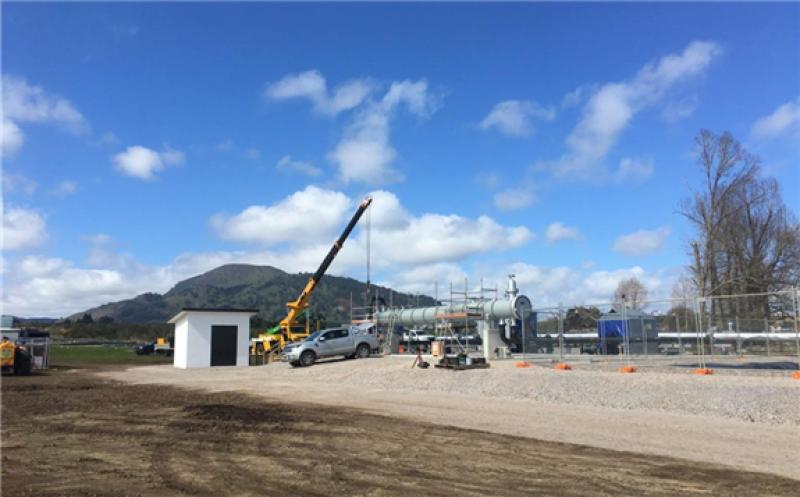 After one year of intensive scientific work, the results of the 2D seismic measurements of the GeoZentrum Nordbayern are now available, as announced in a press release. They show a completely new picture of the subsoil in Franconia and point out potentials for geothermal energy production.

From October to December 2018, scientists from the GeoZentrum Nordbayern at Friedrich-Alexander-University Erlangen-Nuremberg (FAU) used vibrating vehicles to study the subsurface in Franconia over an area of ??approximately 4,000 square kilometers.

“We evaluated a total of 100 gigabytes of geological data and now have a completely new image of the subsurface in Franconia”, explains project leader Dr. Wolfgang Bauer. “This explains much that was previously not understood due to a lack of data.” The starting point for the investigations was a so-called thermal anomaly between Bamberg and Coburg. Drilling in the 1970s had found significantly higher temperatures at 1,300 and 1,600 meters than expected.

Vibro trucks provide a cartography of the underground

An explanation of the nature of the subsoil at a depth of up to 6,000 meters and explanations for the thermal anomaly should be provided by a large-scale 2D seismic campaign. In addition to the general scientific findings on the nature of the subsoil, it was also of interest to investigate the specific uses for geothermal energy in northern Bavaria. The project manager is the Department of Geology at the GeoZentrum Nordbayern.

From October to December 2018, seismic measuring vehicles traveled four measuring lines totaling 230 kilometers in length. At 2,311 measuring points, the lowerable steel plates at the bottom of the vehicles sent vibrations into the ground for about 16 seconds, which were reflected at geological layer boundaries and resumed on the surface of geophones. These recorded reflections provide information about the geological structure of the subsoil. The scientific evaluation of the generated data of around 100 gigabytes required a year of intensive work.

For the first time, profiled sections through the layers of the earth are available, enabling a new interpretation of the underground in Franconia. “Many of the geological disturbances can be explained by suspensions in the foothills of a mountain front, the so-called Franconian line,” says Bauer, describing the movements of the earth probably during the Cretaceous. In the southeastern part of the Haßberge district, a large granite body was found, which is located near the center of the thermal anomaly.

“Our previous findings can not fully explain the thermal anomaly,” says Bauer. “However, the data is a good starting point for further investigations.” These are already being planned. For example, it is planned to investigate the granitic body in more detail using compacted 3D gravimetry. On the one hand, its extent is to be grasped, on the other hand, it is about finding fracture zones within the granite, which may be permeable to water. Even in the Cretaceous postponements parallel to the Franconian line, it can not be ruled out that the heat anomaly comes from hot deep waters. “Of course we can not say that yet,” adds the project manager. “Further investigations are therefore necessary and it requires here also one or more test wells.”

“The need for renewable heat is also high in francs,” explains Dr. Wolfgang Bauer the focus of further research. “Next year, together with the University of Bayreuth, we will conduct a study comparing underground heat demand and underground geothermal potential to identify particularly suitable sites for further study.”

Basically, there is interest on the municipal side and also from the private sector in the investigations and the use of deep geothermal energy. “Inexpensive energy has always been an important factor in economic development. Geothermal energy is baseload, renewable and climate-friendly. ”

Positive feedback from the population

The population in the six districts concerned was extremely open to the measurements. There were no protests or even minor damage, such as deep ruts through the measuring vehicles in rain-soaked forest roads. All damage was immediately repaired after completion of the measurement work.

“I also attribute the positive response among the public to our public relations work together with Enerchange,” summed up Project Manager Bauer. “In all six districts, politicians, authorities and the public were informed before the start of the measurements and there was good cooperation. In addition, a website was set up, which informed about intent and progress of the measurements. ”